Talk about a cool collaboration! 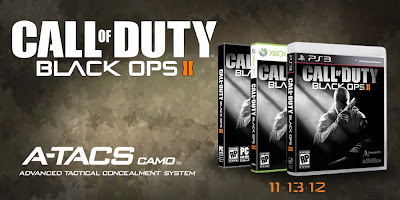 Columbus, Georgia based Digital Concealment Systems, makers of the A-TACS Camo family of patterns has signed a deal with Activision Publishing, Inc., publisher of the popular Call of Duty® series of video games. As part of the deal, A-TACS Camo patterns will make their first appearance in the blockbuster Call of Duty®: Black Ops II video game developed by award-winning studio Treyarch.


A-TACS Camo patterns will be a playable option and integrated throughout different levels of the epic game.  A-TACS Camo was introduced in 2010 and has quickly risen to the position of a recognized brand leader in the tactical market worldwide. There are currently two camouflage patterns under the A-TACS Camo brand. A-TACS AU (Arid/Urban) Camo, and A-TACS FG (foliage Green) Camo.

“There is no other entertainment brand in the world like Call of Duty.  And, we are excited to be a part of this year’s massive release Call of Duty: Black Ops II, a game that brings incredible graphics, immersive gameplay and the most visceral gaming experience imaginable,” stated Phil Duke; DCS partner and A-TACS Camo pattern developer.

More information on Call of Duty:
Black Ops II can be found at http://www.callofduty.com/blackops2 or on www.facebook.com/codblackops.
Fans can also follow @Treyarch on Twitter.
For more information on A-TACS Camo, contact Phil Duke at: philip@a-tacs.com or, visit them online at: www.a-tacs.com.

ACTIVISION, CALL OF DUTY, and CALL OF DUTY BLACK OPS are trademarks of Activision Publishing, Inc.  All other trademarks and trade names are the properties of their respective owners.
Email Post
Labels: A-TACS Camouflage Camouflage in Video Games News