I'm a day late in my posting, but check out the new pattern variant released by DCS! Its moniker is A-TACS LE and is obviously targeted towards the law enforcement community. Here's the full release: 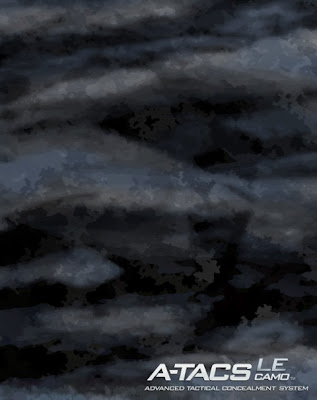 Columbus, Georgia-based Digital Concealment systems announces the introduction of the newest camouflage pattern in their line-up. As the name indicates, new A-TACS LE Camo was developed for Law Enforcement professionals. The pattern combines various shades of grey, blue and black and utilizes the trademark “organic pixel” look developed by DCS for its original A-TACS AU Camo pattern. A-TACS LE also incorporates variable angles and urban forms derived from photography and effectively utilizes an even blend of light and shadow to create unique pattern with a slight horizontal flow. Additionally, A-TACS LE Camo was developed to work with variable combinations of black or blue nylon gear and other equipment allowing municipalities and departments the option to easily upgrade their kit on an “as needed” basis, gradually phasing in new items while still maintaining a cohesive and uniform appearance.

A-TACS LE Camo will be available on a wide variety of fabrics and substrates including hydrographic film in the coming months. For additional information on A-TACS LE Camo, contact Digital Concealment Systems by e-mail at: info@a-tacs.com or, visit them online at: www.a-tacs.com.