I began drafting this article a couple months ago but lost it, and had to start from scratch, but this product has received very little press up till now so hopefully it's still relevant/interesting. 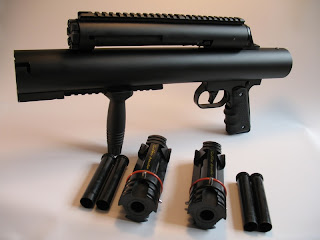 Ever want to have a paintball rocket launcher without worrying about air tanks or CO2 cartridges? Yeah me neither, but the guys at Tankless Invasion wanted exactly that, and came up with a rather cool solution for it. The answer? Explosions. Or more specifically, a launcher using an easily available disposable butene/propane canister with a built in igniter (powered by AA batteries). That may sound dangerous, but it uses the same trusted technology in some portable nail guns, Paslode Impulse fuel cells (specifically, the red kind).

Here's the ad copy:
"The TKL - 01 is the next generation of launchers. Not only it is the best choice for launching rockets, it's also the most innovating grenade launcher system on the market.

It's a light, powerful, reliable machine that will have your opponents shaking in their boots

This launcher uses a small canister filled with a combustible material(fuel cell), to provide fuel to a combustion engine which burns the fuel to generate a high pressure pulse, propelling the foam rocket or the paintballs inside of the grenade shells attached to the muzzle.

The combustion generates the same power of a Co2 or Compressed air, and it is 10 times smaller and light. (No more heavy tanks attached to the gun).

With this gun, the "Tankbuster" can go towards the tanks, shooting the opponents that get in his way, using the grenade shells;

Bust the bunkers and tanks shooting rockets on them."

Here's a vid from the Milsim Corps:

Oh, and by the way, each fuel cell can power 1,200 shots. And two fuel cells cost $15.00. Do the math.
Email Post
Labels: Airsoft Launcher Milsim Paintball