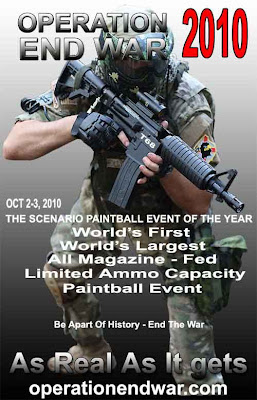 The world has changed, and the old superpowers are back with vengeance. After a horrible nuclear exchange, the Middle East was obliterated and its oil destroyed. The Russians drained Siberia to meet the world's demand, driving prices through the roof and bringing the bear back onto the world stage. Europe bound together with uncharacteristic militarism in defense of their eastern border...

...and the US built a low-orbit platform for deploying Marines anywhere in the world on short notice. We have an anti-ballistic-missile shield...but now, so does everyone.

So it's up to those Marines gear-up to protect our country one carefully aimed round at a time. The Europeans lean heavily on their ground forces for defense. The Russians enjoy the rebirth of their empire.

And it's all balanced on a fine point that's about to break.

Join the fury this summer, with "End War," a massive scenario brought to you by Real Action Paintball and some of paintball's finest teams, promoters, and fields.

This exciting scenario will be as real as it gets: only magazine-fed markers will be allowed. The rental package available FREE to all players includes not only the use of the latest T68 Gen6 markers, but also three magazines and a MOLLE pack to hold them. Players may bring their own .68 or .43 markers, and strict mil-sim equipment and apparel is encouraged for the ultimate playing experience.

With onboard ammunition limited to realistic quantities, comes the increased importance of tactics, technique...and backup. Get your friends onboard now for your squad. When you practice this weekend, focus on cover fire and movement. Train like you're going to compete.

Then check out RAP4's compressed air powered paintball "landmines," "grenade launchers," and other tools of the trade show scenario domination-you'll need everything you can get to protect America.