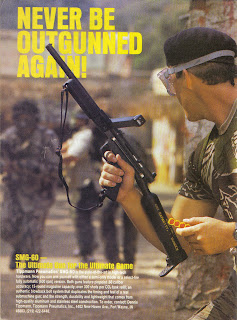 Introduced to the paintball world in 1987, the Tippmann SMG-60 was the first semi/fully automatic paintball marker. Also, it is arguably the first milsim marker ever, bearing a remarkable resemblance to the Sten mk. II (pictured below).

For more information on the specifications of the SMG-60, see Vintage Rex. 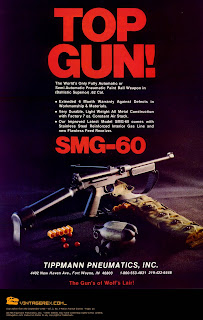 Some SMG-60s can still be seen for sale on various paintball forums, and on the occasional local listings. It is considered a collector's piece, and doesn't have a home on most commercial fields due to its unconventional caliber (.62). However, it does have a much harder to find (and considerably more expensive) cousin chambered in .68 caliber, entitled the SMG-68.
SMG-60 firing (not me).
As you can see, the SMG-60 has a rather spectacular rate of fire (600 rpm), which, combined with its lack of any safety mechanism, led to the banning of the SMG-60 on many fields in its heyday. Even today, it commands an intimidating presence on any field.
P.S. (Shamelessly) Should anyone want to part with their SMG series marker, you know where to find me...
Email Post
Labels: Milsim Paintball SMG Tippmann