Milsim Questions: "I Want to Play with Mag-Fed Markers, but Nobody in my Area Uses Them"

This week on Grey Ops, I'm going to be running a "Milsim Questions" series, addressing common or notable questions that crop up amongst new players. If you have suggestions as to what questions to address, feel free to leave a comment below any of the posts, and I'll see if I can do something with it. 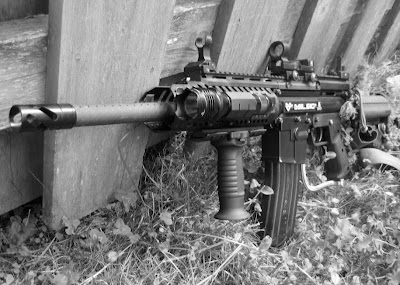 With magazine fed and limited capacity paintball on the up and up, I'm growing very tired of one often repeated phrase that I keep hearing, and have heard for a few years now. That phrase is: "I'd love to play limited capacity/mag-fed paintball but nobody in my area plays with mag-fed markers."

The reason I'm tiring of it, is it's a rather defeatist and self-pitying attitude to adopt, and even then it's not necessarily true.

Instead of sitting on the limited capacity fence, here are some solutions if that question has passed your lips:

1. If you nobody plays with a magazine-fed marker at your field, there are probably other fields within driving distance of you that do. Try asking around to see if there's a field that caters to a more limited capacity crown.

2. If that isn't the case, be an ambassador for that style of play. Most players that I've known in the past few years that have used magazine-fed markers would use them at most paintball fields, regardless of what others are using. You'll probably still end up having fun, and you'll likely quickly adapt to the play style.

2. Try networking. Most of these comments seem to crop up on various social media, the very same locales wherein you can reach out and organize mag-fed games.

3. If you don't want to be challenged by equipment limitations and be outgunned on the field, than it may be that limited capacity paintball isn't for you. I'm not saying that with any kind of maliciousness, but it would be a shame if you plunk down several hundred of your well earned dollars on a set-up that you quickly decide isn't for you. Don't let anyone dictate your style of play for you, play how you want to, after all it is a hobby in the end.

In the end, my message is: screw other people. Play how you want to, it's something you're doing for enjoyment so get the most out of it by playing it your way.