The gents at SAS Woodsball wanted to pass on some details of a game they'll be having in Ottawa's East end, check it out: 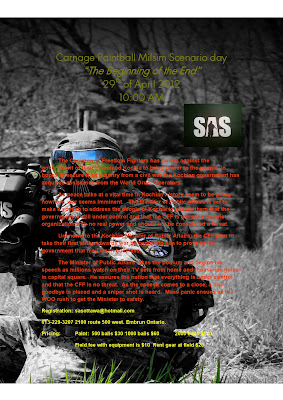 Carnage Paintball Milsim Scenario day“The beginning of the End”29th of April 2012 10:00 AM
The Coalition of Freedom Fighters has turned against the government of their homeland Kochia to bring power to the people. In hopes to secure their country from a civil war the Kochian government has acquired assistance from the World Order Operators.
As peace talks at a vital time in Kochian history seem to be going nowhere, war seems imminent. The Minister of Public Affairs is set to make a speech to address the people of Kochia to assure them that the government is still under control and that the CFF is merely a terrorist organization with no real power and should not be considered a threat.
Unknown to the Kochian Minister of Public Affairs; the CFF plan to take their first strike towards war by capturing him to prove to the government that they mean business.
The Minister of Public Affairs takes the podium and begins his speech as millions watch on their TV sets from home and thousands gather in capital square. He assures the nation that everything is under control and that the CFF is no threat. As the speech comes to a close, a final goodbye is placed and a sniper shot is heard. Mass panic ensues as the WOO rush to get the Minister to safety.
Registration: sasottawa@hotmail.com 613-229-3207 2100 route 500 west. Embrun Ontario.
Pricing:Paint: 500 balls 30$ 1000 balls 60$ 2000 balls 110$Field fee with equipment is 10$ Rent gear at field 20$