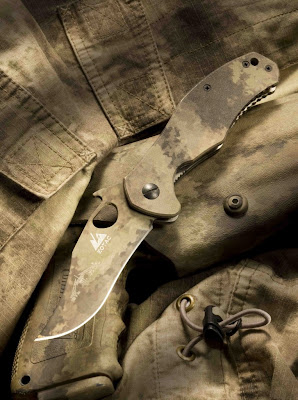 Picture above is an Emerson knife in A-TACS.
A-TACS, the new and potentially revolutionary camo pattern revealed in the latter part of 2009, has now been formally launched at Shot Show 2010. I have recently been in contact with Steve Hanks and Philip Duke of Digital Concealment Systems (DCS), and Philip was kind enough to answer a few of my questions:


What prompted the creation of A-TACS?
To be honest, we saw what was on the market, and felt like there was something we could add. We like to push the technological envelope. We've been innovators in the world of hunting concealment for the past 15 years so in many respects, it is a logical extension of what we have already done. After much study, we realized that the methodology behind many of the "digitized" or pixelated patterns was wrong. Ask any sniper or tactician, they will probably tell you that ninety degree angles and squares do not effectively replicate the environment. Additionally, small patterns tend to close-up at a distance and create a blobbing effect. A dark or uniform silhouette makes an easy target! These are a few of the conclusions that led us to where we are today.
Who is the team behind the creation of A-TACS, and what is their experience?
The team behind the development of A-TACS is small. Steve Hanks, my partner with 20 plus years of background in fabrics, Richard Howard, my other partner with 20 years of experience on the hardgoods side of the fence and myself, Philip Duke. I have been involved in developing concealment systems for the past 18 years.
A number of environment-specific variations have been mentioned, what environments can we expect to see covered, and when are they expected to be released?
A-TACS is a universal concept. We are currently testing and building pattern variants based on other types of terrain. While the character of each pattern will be different, they will still utilize the same "pattern within a pattern" concept. We will make announcements on new variations in the coming months.
What was the response to A-TACS at Shot Show 2010, and who were some of the interested parties?
Demand at the SHOT Show was overwelming to say the least. We had interest from all facets of the tactical, military and law enforcement communities. Interest is worldwide at this point, which is something we never expected. We are finalizing deals with a number of manufacturing partners but cannot say who they are until the time is right. Expect new announcements in the coming months on our website. 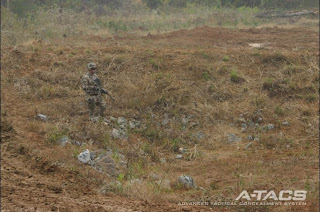 A-TACS appears to be off to a great start, and their strong customer service is an asset to them. Keep your eye on Grey Ops for more A-TACS articles in the near future.
Email Post
Labels: A-TACS Camouflage Interview UCP