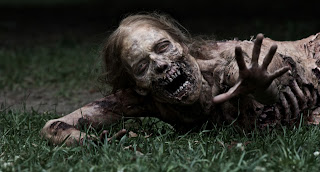 It's that time of years, when the walking dead (notice lack of capitalization, don't sue me AMC) begin to meander towards paintball fields. And event organizers love it.

But those of us that have played zombie paintball games know that they're not always as fun as they would initially seem to be.

So without ado, here's my list of why zombie games don't always work:

All this being said, I would love for more zombie games to work out well! It's a great idea in general, and if implemented properly I'd probably love to play zombie games again.
So players, field owners and organizers, chime in! Let's make a basic zombie rules guide so zombies can be used effectively (uniquely), and in a fun manner for all those involved.
Here's one suggestion I have (let me know what you think of it): reduce the zombies' markers to a velocity of 200ish, while keeping survivors around 300ish. This would force zombies (who should have an advantage in numbers) to rely on rush tactics, as the survivors will be able to use range to their advantage.
Email Post
Labels: Event Paintball Zombies