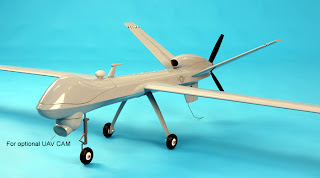 Paintball fields have the luxury of normally taking place outside of urban centres and frequently on large stretches of private property. That makes them perfect for flying large radio controlled vehicles in, and with the price of radio controlled machines continually dropping over the years (now you can pick up an out-the-box flyable plane from an electronics store for <$20) the machines are now accessible to the general population of gadget lovers (i.e. a large portion of paintballers). Milsim paintballers will be happy to know that some companies already offer ready to fly or assembly-required RC planes that resemble real-world drones. 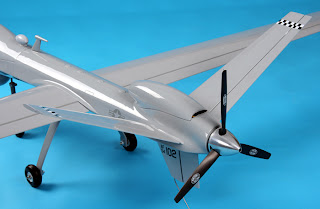 The kit I've pictured here requires a seasoned hobbyist to put together from the looks of it, but it's drop dead gorgeous and has the ability to house a sizable camera.

The actual applications of drones such as this one are pretty apparent, in the near future milsim scenarios could offer each team a drone on lease, with experienced RC pilots behind the reigns and an "analyst" relaying troop movement and other information to the team's leader. Given that many players are willing to drop over a grand on a marker, I'm sure many would leap at the chance to fly their own drone in a game. 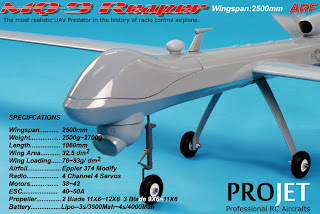 Of course with these drones, the future holds the possibility of having headlines such as, "Toy Mistakingly Shot Down by CFB Trenton Jet, Local Paintball Enthusiast Held on Unspecified Charges." Worth the risk? I'd say so.
Email Post
Labels: Future Milsim Paintball Scenario