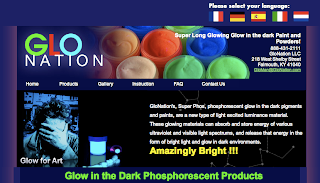 While most paintball games take place in the daylight or in brightly lit indoor environments, but there are milsim games that take place in dark or near-dark areas for specific scenarios. In more important applications (i.e. with real firearms) the common method for illuminating iron sights of pistols and rifles is the use of tritium-filled vials, but obviously this is a complete extravagance for paintball. So what do you turn to? Flashlights are all well and good, but as Mike recently touched upon, they illuminate you as well, and common phosphorescent paints you find at stores really suck. So what you really want is a company that makes awesome glow in the dark products, that are safe and last for a ridiculously long time (for less than an arm and a leg). Somebody like this: 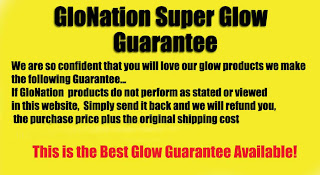 Glo Nation produces and sells several phosphorescent paints (and the non-solvated powders they're based on as well) that have glow times of 10+ hours for a very affordable price (roughly $5 an ounce). By comparison, most other paints will glow for a matter of minutes and cost you an arm and a leg at a craft store. They're available in pigmented and unpigmented versions (unpigmented versions look white in the daylight). They don't say exactly what it's made of, but say that it is strontium based, which probably means it's made of strontium aluminate, which is a relatively safe compound (eye irritant, that's about it).

I've got a sampler of 1/2 ounce vials on the way, look forward to a night sight DIY post soon, as well as a review of the paints.
Email Post
Labels: How To Light Milsim Paintball