I recently made a post described as a giveaway and promotion. I got the giveaway part right, but completely forgot about the promotion! Did nobody pick up on that? 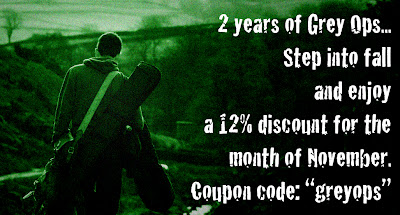 As a way of saying thanks for 2 years of Grey Ops, I'm also offering 12% off everything in-store at Crypsis. Coming early next week I'll have some pre-orders for Helikon-Tex gear as well. Thanks guys!
Email Post
Labels: Crypsis News Store