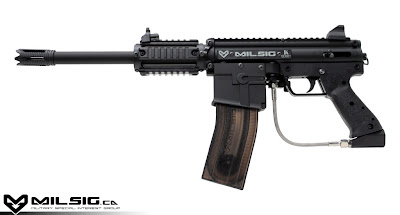 The first thing you have to understand about any review is where the reviewer is coming from. In my review of the K-Series, (Mk. I?) I began with saying that it was one of my favorite markers. So this review is coming from someone that believes that the Milsig K-Series was already a great marker that didn't need significant improvement. I suppose what I'm trying to say is "haters gonna' hate.", so don't expect a review that paints the K-Series as a piece of shit that needs to be fixed. Mkay? 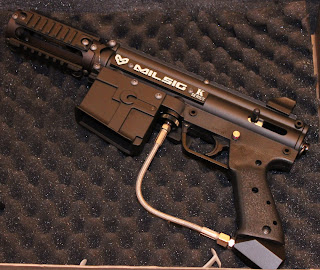 Marker: Milsig K-Series Mk. II (in this case the CQB PRO) - Thank you to Milsig for providing a review model.

Options: Plenty of different marker platforms (many very cool ones in fact, a much better selection than the previous iteration of K-Series), A5 stocks, A5 barrels, air-in-stock, anything you can slap on a picatinny rail 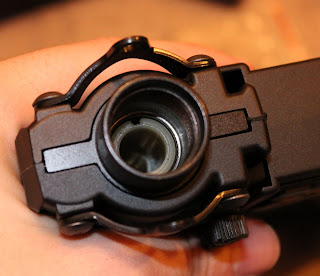 Notice the brackets and new style of bolt.
Specs: 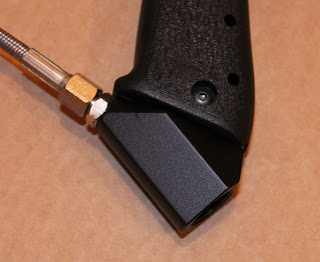 Cool shape, a sign of the little aesthetic niceties improved upon by Milsig.
Pros: Details. That is exactly what the Milsig K-Series Mk. II aims at, and it takes them down with a vengeance. From the moment you open the box, the appearance, presentation, and feel of the Mk. II is a complete experience, something the first version perhaps fell a bit short of. Gone is the styrofoam (which I hate, nay, abhor) and instead a beautiful black foam cushions the entire marker. The box itself is a matt black spartan shell that makes for a much more attractive package on the shelves.

One of the biggest, yet least focused-on faults of the Mk. 1 was probably the less than invincible coating, which is rectified in a big way for the Mk. II. The Dura-Plating process creates something that feels much more like an anodized finish, perhaps with just a touch more texture.

The recurring problem I had with my first K-Series has also been fixed, in that the cocking handle is no longer separate from the hammer (but is instead a cool little "floating" cocking handle held in place on the hammer by the back pin/spring). This means that it's extremely unlikely to break, while giving up the ability to swap the cocking handle from one side of the marker to another (which I don't think many people did anyway).

Performance wise, it shoots like a Tippmann 98/A5. That can't truly be counted as a pro or a con, it's a preference, so if you like Tippmanns/Milsigs you'll like the Mk. II. If you don't, I'd say there's no guarantees that it will convert you. Tolerance-wise, I'd say it's less finicky than the previous model, with the mechanical improvements most likely/hopefully making all stuttering and burping issues disappear across all markers. Using it thus far, I've seen no evidence of burping or stuttering, perhaps also a consequence of the new bolt and hammer.

Cons: I understand the psychology of selling a marker that allows for a hopper feed, even if it's not meant for that purpose. People feel safer about the purchase and probably find it an easier transition from typical hopper-fed play (ideologically anyway). However I feel that it still minutely mars portions of the aesthetic, and could probably shave a few dollars off each marker (which could go back into Milsig's pockets).  I may be alone in that.

If I could have changed one other thing about the appearance/trivialities of the Mk. II, it would have been to make the picatinny rail on the receiver truly go all the way to the front (muzzle end) of the receiver. The slight edge makes putting on some accessories a bit of a bother, and I'd just like the look of it that much more.

Now for what pissed me off. That craptastic front site that comes with the CQB PRO. When I took it out of the box and tried to figure it out, I believe my exact words were, "What the tits is this?". It's a two-piece plastic conundrum that's harder to put together than an Ikea set of Penrose Stairs. I figured it out, but not before I tried several configurations to no avail. MBUS knock-offs can probably be made for the same price as this, if maybe a few pennies more. I believe this sums up my rant about the front site, which I shall now end as it's probably not important in the grand or even registrable scale of things: click here. 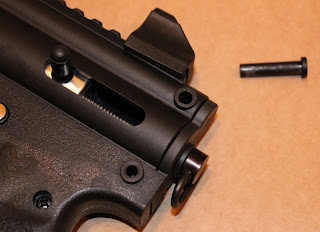 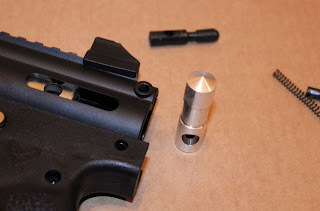 Overall: Milsig listened: they dropped their price point, they fixed details, they didn't change what worked, and didn't break anything. It looks better, shoots better/in a more consistent fashion (from what I've seen in the relatively short term) and just plain feels better. The immediate reaction from a lot of people, and I've seen it abound, is: "it's the same marker, what's the point?". Well take a look at it this way: new EGOs come out every year, and each time it's with minor improvements or changes. But the price either stays the same or goes up. Milsig has done the same thing (with a questionably different magnitude of changes), but has lowered the price. Perhaps old players won't feel as attracted to the marker, as they already have something that works. But players that have issues touched upon by the Mk. II changes or new players should get all over this.

There's a sense of rejuvenation around the international Milsig corporation (perhaps not as much so for Milsig Canada, which confuses people with airsoft/toy brand dilution in my opinion), and I think it will pay to keep your eyes on Mr. Lau. If he continues with the trend and keeps improving, and keeps up the brand's momentum, I think we can see mag-fed play grow, especially in burgeoning locales like Europe and the now increasingly paint/cost thrifty players popping up in the States.

In the meantime the front site can burn in hell. Seriously,

I was going to do stress tests as part of this review, but an injury will be keeping me from paintball for the next couple months at least. Keep your eyes and ears peeled to forums and social media if you want to find out how the marker stands up to time/hard play. In the mean time... I need to get rid of this marker. What should I do with it? Hmm? More on that soon.
Email Post
Labels: Canada Milsig Milsim Paintball Review