Any time Guy Cramer is mentioned I get a bit irked. I don't feel comfortable about the Canadian government awarding him the CUEPAT contract (out of necessity, as he was the only candidate) for a variety of reasons, but I'll try (my hardest) to keep that out of this post and just show you what he's come up with as candidates for CUEPAT. All sourced from Hyperstealth's Facebook page. 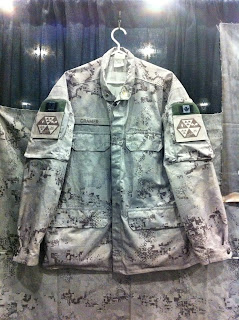 This is the first of two patterns which are in field trials with the Canadian Military. This pattern is a more traditional pattern compared to version-2. Photos of version-2 will be released later today." 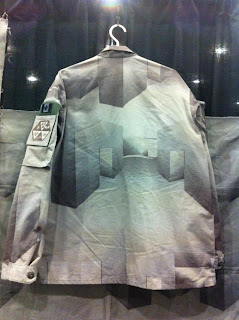 "CUEPAT-2 (Canadian Urban Environment Pattern) version-2
This is the unconventional pattern in field trials, previous computer simulations showed this pattern to be quite effective for both outdoor and indoor urban environments. The perceived depth within the pattern throws off the ambient and focal vision from noticing the target."

Well CUEPAT-2 may be all well and good, but hold on knickers boys and girls... GREYOPSPAT-2 uniforms will feature tesseracts as part of their pattern. Forget asking "Where is he?", people will be asking "When is he?!?!". Haha, oh I'm sorry that's just pure pseudoscientific bullshit I'm spouting. Patent pending.
Email Post
Labels: Camouflage Canada News Satire