Clearly Santorum is clearly some kind of communist. If he had any real sense of pride in the tradition of American manufactured firearms he would have demanded that the Romney look-alike use M4 parts. 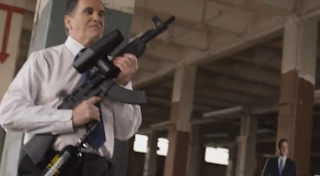 But seriously, I'm just joking. Don't you dare turn the comment section into a Republican nom debate. If you do though, it has to be solely on their platforms in concerns to whether or not they'll let Valken sell at the PSP if they're elected. And go.
Email Post
Labels: Paintball Tippmann United States Video