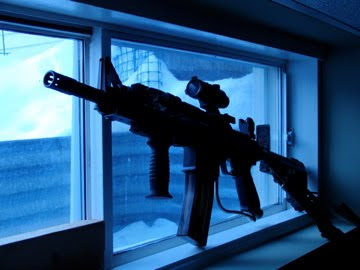 As heated as the real steel "Clip vs. Magazine" debate is at times, you need not look far on many paintball forums to stumble across a "Marker vs. Gun" discussion. The matter of contention is, "What should paintball-launching devices be referred to as?"

Here's a brief rundown of the sides:

Pro "Marker": The use of the term "gun" encourages paintball's negative association with firearms and jeopardizes paintball's image in the public eye. More players and parents will be encouraged to support paintball if a word like "marker" is attributed to paintball devices. Saying "marker" instead of "gun" avoids the seizure of paintball devices, and eliminates the risk of any authority reacting to the word "gun".

Pro "Gun": Saying "marker" gives into modern day political correctness. It's superfluous to use a term such as "marker" when many paintball devices are made to look like and even function like real firearms. The most instinctual way of referring to a paintball device is as a "gun", and you must go out of your way to refer to it as a "marker".

Personally, I tend to use "marker" around those that do not play paintball, and "gun" in a casual paintball atmosphere. I believe that "marker" has its place, especially in publicly published media.

What do you say? Why?
Email Post
Labels: Guns Paintball