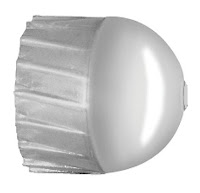 Even though they've been out for a while, there are still tonnes of questions floating around concerning Tiberius Arms' First Strike rounds. I think this is mainly because the information out there hasn't been publicized, so I'll try to rectify that as best I can.

Touted as being 25X more accurate and having twice the range of a typical paintball. It is a self-rifling .68 caliber finned paintball, available in white and blue (harder to find) fill.

How much does it cost?

Here in Canada, prices for a single 8 round tube of First Strikes run anywhere from $7 CDN to $10 CDN. That puts the rough cost at $1 per shot. That being said, these aren't mean for 200 round hoppers, and the very nature of the paintballs means they are used much more conservatively. I have seen very few people run solely First Strike markers (although there are some), and there are many players that view them as a novelty item. All that being said, there are new bulk packages of First Strikes that are already rolling out, greatly reducing the price of the rounds. 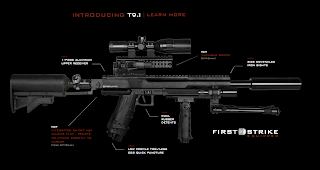 Where can I use them?

Many paintball fields do not allow the use of First Strike rounds, as they are still new on the market, and not completely trusted yet. I know for a fact that CQB 2 allows the use of First Strike, but only in a limited fashion. If you're unsure if your field would allow the use of them, phone them up. If they don't, it's possible that they just haven't seen them used before, so bring a tube or two out to them to try.

From what I've seen, yes. While the supposed spin that the fins create has yet to be qualitatively shown to me (see below), the rounds are definitely more accurate and precise than a typical paintball. On top of that, the range of First Strikes is much greater than that of a regular paintball.

Video created by Punkworks.
Is it environmentally friendly?

While there is no evidence to say that it is environmentally harmful, First Strike rounds have been shown to not degrade under normal outdoor conditions. Watch the videos below by LordOdin:

This test's last update was seen on the 285th day of the experiment, and it remains to be seen when or if the First Strikes will degrade. That being said, you'd have to have a lot of money to spend for First Strike rounds to accumulate into any substantial amount of waste.

Luckily, LordOdin has tested this as well! Because his series on First Strike safety is so large, I have created a video playlist containing all the relevant videos:

What markers can use First Strikes?

Well, as of today:

Should I buy the First Strike Conversion Kit for my existing Tiberius marker?

I think this is a big mistake. Many people have reported minor issues with their converted markers on various forums, and the price for a first strike ready T8.1 is roughly $200, while a conversion kit for a T8 is almost the same price (roughly $150). The T9.1 is significantly more expensive than a conversion kit so it may make more sense to convert a T9, but the new T9.1's have many more options, including a rear ASA, that will not be found on a converted T9.

Disappointingly, no one has eaten a First Strike yet, or anyone that did has remained silent about it. Although, given their resilient and brittle nature, it might be a risk to whomever tries it.

If there's anything I missed, let me know and I'll post it up. A special thanks goes out to Lawrence for this post.
Email Post
Labels: Milsim Paintball T4 T8 T9 Tiberius