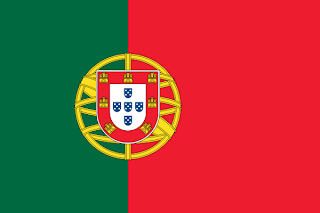 While many countries have their struggles with paintball due to various laws and regulations, few have it as bad as Portugal. Andre Faria, former president of Paintugal, was kind enough to elaborate on the situation for me. 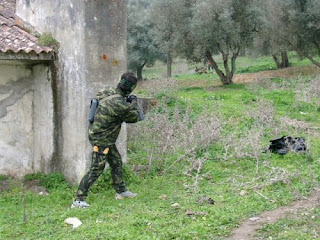 Matters got worse in 2008, when a rise in violent gun crimes and media pressure prompted the government to place restrictive paintball laws in place. Players then required permits to own paintball markers, marker rentals were banned, selling without a gun permit was banned, gun safes were required to house paintball markers, special permits for every marker on the market, and operational velocities were reduced to 100fps. Paintugal stepped up to the plate and rectified the situation by meeting with the Government and the Group of the Assembly of the Republic. The result of these meetings was the exclusion of paintball markers from gun laws. 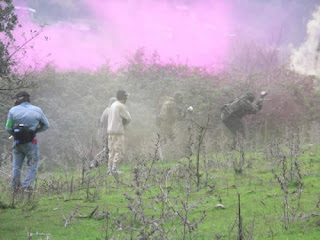 In 2009, police seized 2 trucks of paintball markers and paint grenades from Estratego Major European Wholesale. In an act of good will, the Police department was invited to the biggest Iberian game of the year. Their response being that anything that they saw that looked like a real firearm would be seized, and anyone touted such a marker would incur a $500 fee. The reason for these seizures was given as the markers being subject to the following paragraph of Portuguese law:

Everything that looks like a gun that fires "hydrosoluble projectiles", is illegal if:
- The stock and barrel tip are not painted with a fluorescent colour
- The owner is not a registered member of a Sport Promoting Association, recognized by the Ministry of Sports and the police
- They are sold in a location not equipped with a firearms permit or a gun safe/vault 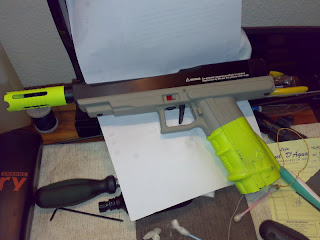 Example of a legal paint scheme on a T8.
Paintugal disagrees with this legal technicality, and through cooperation and the securing of a Sport Promoting Association title they wish to exclude the above paragraph from Portuguse law. Members of Paintugal can be seen in many different milsim forums and other online venues. Make your support known to these upstanding individuals, and help them legitimize the sport they love.