Skip to main content
Labels
Posted by Connor May 16, 2011

CUEPAT (not actually CUEPAT pictured, but another urban pattern by the apocryphal awardee of the CUEPAT contract, Hyperstealth)
About 2 years ago, the Government of Canada put out a solicitation (that was essentially a closed one), basically placing a 25k contract into the lap of Hyperstealth. This solicitation asked for an urban pattern to outfit the Canadian Forces with hazard suits that would match the landscape of Vancouver, Toronto or Montreal in the event of a nuclear, biological or chemical attack. So far, nothing has publicly come of this, and no pictures or evidence of the pattern have appeared. 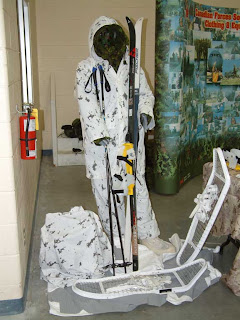 
So far the only evidence of a Winter/Arctic variant of CADPAT comes from promotional images from Consoltex. In case you hadn't noticed, Canada is fairly famous for its snow. Many regions in Canada experience more than half the year as winter, and there are vast swathes of arctic expanse in our great nation. While pure white works great in the arctic, new IR imaging technology makes pure white somewhat obsolete, and disruptive camouflage is the long touted solution to that.
Email Post
Labels: Cadpat Camouflage Camouflage Week Canada