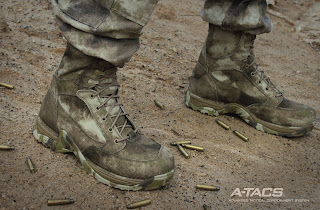 This marks my first boot review for Grey Ops, and I'll try my best to acheive the same level of detail that Mike has set the bar to, as I bow to him as the resident boot expert. A-TACS has been kind enough to supply us with a first run sample of Danner's unreleased (due out in July) Desert TFX® A-TACS® GTX® Uniform Boots. That being said, keep in mind that these are not the final production boots (which Danner says will be improved upon, although I don't see a lot of room for improvement in the first place!).
Here are some abridged specs (from Danner):
The quality and durability of Danner boots has been touched upon in Mike's previous review of the Striker and Telson GTX (two other GORE-TEXed boots in their lineup), and I'll be doing a follow-up with these guys to see how they're performing. 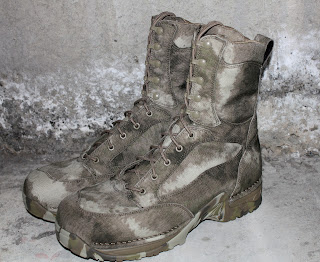 In my basement before I first put them on. Purdy.
The first thing to comment upon with these boots is, obviously, they're completely covered in A-TACS! The sole is similarly camouflaged, for times when the wearer is lying prone. From what I've seen there is a pretty polarized divide between those that like their boots to be camouflaged, and those that prefer more traditional coloration. In seeing how nicely the camouflage is integrated into these boots, I think even those on the non-camouflage part of the divide would be tempted into trying these on. 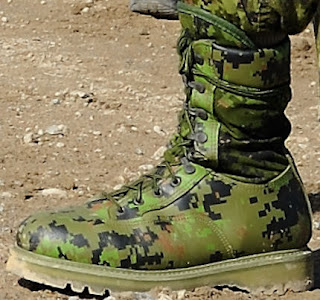 A not so well implemented camouflage pattern (CADPAT) on boots. 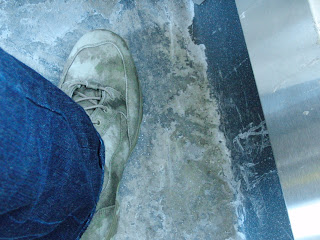 On the bus (just to prove that I actually tested these out)
I float between a size 14-15 boot, and the size 14 TFX fit like a glove, with just enough snugness that breaking them in will make them perfect. They feel like a light pair of runners when walking, running, jumping and running stair flights (tested this out at some of the larger stairwells at uOttawa between classes, got a couple weird looks). The heel sits a bit higher than what I'm used to, but it made running a bit easier and I've already acclimated to it. I have flat feet so standing in one position for a long period of time without adequate footwear causes my lack of arches to ache like hell, but after standing on a bus for 1.5 hours my feet felt like they did after wearing a pair of New Balances for the same length of time. The lugs on the sole performed to my liking, and when they became gummed up with slushy salty snow, they were easily cleared with a quick heel kick on the ground. As far as traction goes, lugs are lugs in my opinion, any good modern boot you get is going to give you excellent traction across most terrain. 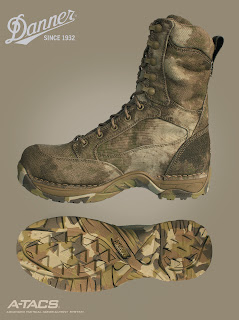 One of the features you'll notice in the specs list is the speed lace system, and I found it quite impressive. Maybe its because I've never used a speed lace system before, but it made putting on these boots 2X quicker than I would have anticipated (on that note, let me do a quick aside and say that I'll put up a quick video soon that will make you rethink the way you've tied your shoes for your entire life). To get the best fit possible, you'll still need to manually tighten the laces over the top of the foot, but for the most part all you need to do is get your foot in the boot and yank on the ends of the laces. 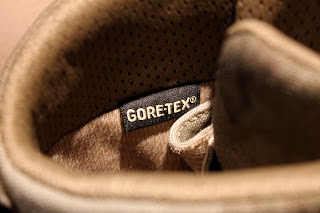 I tested out the water-proof potion of the boots specs in some deep snow, and my feet stayed completely dry for hours afterwards. As with any GORE-TEX equipped piece of gear, you're likely to sweat a bit more than normal, so bear in mind that Danner has another TFX without GORE-TEX in A-TACS if you plan on wearing these in Arizona or the like.

Overall, I think Danner and A-TACS have come together to make a real winner of a boot, and I plan on wearing these on the paintball field and off. If you're in the market for a well constructed and thought out boot, keep the TFX series in mind this spring/summer. 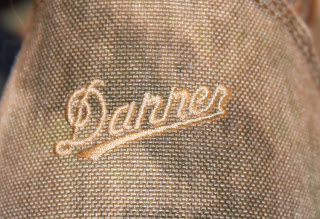 A huge thanks goes out to Digital Concealment Systems for giving Grey Ops this sneak peak at the upcoming A-TACS Danner release! Stay tuned and subscribed (via RSS or email) for updates on the longevity/durability of the TFX A-TACS GTXs (that's a mouthful).
Email Post
Labels: A-TACS Camouflage Footwear Paintball Review