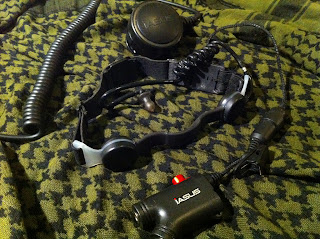 It will be said over and over that in any situation that involves a group effort, communication will make or break you. I have seen far too many times where peoples communication equipment completely shits the bed which ultimately leads to failing at their objectives. This article is more dedicated to all of the simulators out there (airsoft, paintball, militia, etc...) so if you have no interest in any of the aforementioned, its probably best to move along. Im going to start off with a quick wiki on what a Throat Microphone is for those who don't know.

A throat microphone, also laryngophone, is a type of microphone that picks up sound directly through sensors in contact with the neck. Because of this design, it is able to pick up speech in loud environments, such as on a motorcycle or in a night club, where other types of microphones would not function well because the speech would be drowned out by background noise. This type of microphone is also able to pick up whispers and works well in an environment where one has to keep quiet while communicating with others at a distance, such as during a covert military operation. Throat microphones were also extensively used in World War II-era aircraft, and by German tank crews.[Source]

Picture this (as it has probably happened to you before), you've waited all year for the big scenario game and you've managed to move your squad to a forward position that gives you a huge advantage on your enemy. You radio back to command and hear nothing, not so much as a radio crackle. You spend your hard earned dollars on the headset from your local paintball shop and as you reach for your radio you realize that the cable has completely fallen apart as a result of some tall grass. Shit! they just spotted you rustling around in the bush, you're toast now. If only your headset worked the way it should have, you would have just made the game for your team and the rest of your side. Lets face it, this happens way more often that it should but the cycle never seems to break. Lets change that with some information on a headset that is such a game changer that even police, military and PDC's are using it. You may be thinking "this sounds expensive" but communication is a more powerful weapon than your gun, marker or any other tool, so in comparison to what it can do for you, this is the best money you will ever spend.

Now here is where I will get into some of the specs and details about this little setup. The whole setup is worth about $150 -200 depending on where you purchase it and is available for just about any radio pin configuration. In the package you will find the headset along with a shoulder/vest PTT (push to talk button), a finger PTT, your radio specific adapter and a range of earpieces to fit you comfortably. When you un-box your new headset you will be able to note a few things such as the cloth covered cabling and heavy duty rubbers used on all of the wires. All of a sudden you will realize that the situation above is behind you and the next time you take that position, you are going to rock souls. I strongly recommend that you play around with all of the accessories long before you ever hit the field with it, this way you can decide which earpieces you like, which PTT to use and where to place it. You will also likely spend some time adjusting the neck band until it makes good contact, but doesn't choke you. It is always wise to master all of your tools before putting all of your faith in it.

I have owned my NT3 for about a year and a half at this point and it has seen over 50 games with flawless function. I have received no complaints about its clarity when speaking to other people and always receive broadcasts crystal clear. The unit itself shows zero signs of wear and as is natural for me, I have beat the living crap out of it. Overall I don't see why everyone hasn't already bought one of these because as I said before, communication is the most powerful tool you will have on the battlefield. With this mic and a good radio you will maximize on your communication abilities. Keep in mind that this piece will only work as well as the radio it is attached to. Ill have another article out soon talking about what to look for in a good radio and I will share the secret spot where you can save a few hundred dollars to get an amazing radio.
I've written this article as a gift to my good friends over at Grey Ops. Grey Ops consists of a few MilSim enthusiasts that keep the world up to date on what is going on in the MilSim Paintball market. Check them out at www.greyops.net.
That's all for now, feel free to comment or get a hold of me with questions at www.tactical-survivor.com
Email Post
Labels: Guest Post Microphone Milsim Paintball Review