With summer here, and temperatures sure to reach the mid-30s at some point this season (that's Celsius for you U.S. readers), knowing how to deal with and play in the heat is important for everyone heading out to play Milsim Paintball over the coming months. Grey Ops' 3-part BEAT THE HEAT series will cover some equipment and tips for proper heat management this Paintball season.

Your body radiates most of its heat from your core/torso, thanks to the activity of your major organs. As you play hard, muscles also create heat, which in turn warms the blood flowing through them, which then returns to your heart. This heat buildup in your core needs to be managed, and the best way to do this is to wear thinner and better-ventilated clothing to allow heat to dissipate and be carried away by your evaporating sweat.

In this first installment of Beat The Heat, we'll review what shirts are best suited for heat management. To survive a day of Paintball and play hard in brutal summer heat, at the bare minimum you should be losing the standard BDU shirt, and wearing something purposely made for hot conditions.

Many people play successfully in a T-shirt, and going this route will definitely do a lot to keep you cool. I personally wouldn't recommend playing in short sleeve or sleeveless tops though, because bare skin can be split by a solid hit from a paintball, leaving you bleeding. There's also the possibility of an infection from the animal matter (gelatin) in the shells. At the very least, You should have a thin layer protecting your arms, as even this layer can dissipate some of the whip effect of the hit and avoid skin rupture. If the hit is hard enough that breaking of the skin can't be avoided, at least the layer of material will keep goopy paint and gelatin from getting into your laceration.

Moisture-wicking shirts have become very popular in recent years, and are loved by millions of athletes for their ability to keep them cool and dry. Like most good ideas, they've crossed over into military, hunting, and "tactical" applications. 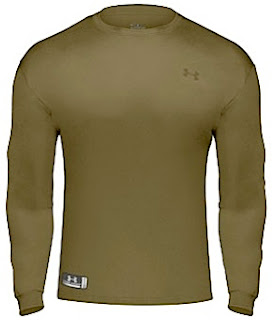 Under Armour makes a long sleeve Tactical Heatgear shirt in Olive Drab, Tan, or Black. The garment is a lot looser than their line of compression clothing that everybody knows well, so there's more room to move freely in it. It's extremely breathable, and perfect for the heat. It's available from retailers online, and can also be found on eBay. A downside to this piece though is that as it's made of thin polyester, it's pretty fragile and might be torn to shreds by the end of the season.

ARC Outdoors markets a nice moisture-wicking base layer shirt as part of their X-System (the X-System is a line of clothing for hunters, with silver fibers woven into the fabric to hide human scent from game). It's a little sturdier than the Under Armour shirt, a tad less breathable, but a much better value. As I type this, X-System shirts in OD green can be bought on eBay for $16.95 shipped!

There's quite a colour difference in "OD Green" between Under Armour and ARC's garments though. The UA shirt is definitely lighter (almost a Ranger Green or Foliage Green in appearance), but if you wear CADPAT or Woodland camouflage as your overall loadout pattern, you may want to go with the ARC. 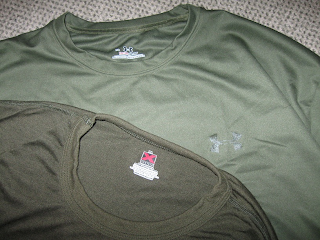 DriFire is a relatively new player in the moisture-wicking base layer business, and they offer a shirt of their own in the category made of a fabric they call modacrylic. 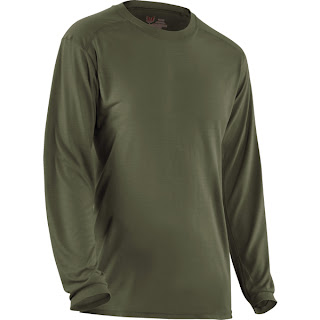 DriFire is big in military circles, as it's less dangerous for deployed troops. Under Armour and similar polyester base layers can melt when exposed to high heat, meaning military surgeons have to spend hours peeling it off a casualty's skin in an operating room if they get hit with fire or an IED. DriFire's modacrylic resists heat and fire, and won't drip or melt when exposed to high temperatures, but still maintains a comparable ability to wick away sweat and keep you cool.

DriFire feels nice to the touch, with a similar feel to a cotton T-shirt (I had the chance to get my mitts on it at CANSEC 2011 last week). However, the Cadillac price should give a Paintball player pause. In Paintball, where flame-resistance really isn't an issue, one would do best to go for one of the lower-priced options above. 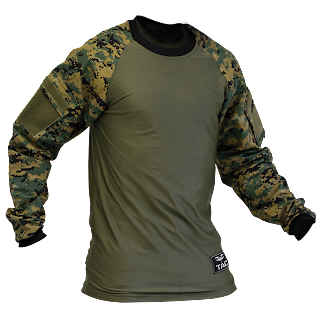 The concept of the Combat Shirt came from the innovators at Crye Precision (the same people who brought you MultiCam and the concept of the Battle Belt/Blast Belt). The Combat Shirt basically takes a standard military BDU shirt, and replaces the torso of the garment with a moisture-wicking base layer. Troops deployed in hot places LOVE these things, and with good reason. The base layer part of the garment sits under their vest/armor, where body heat from their core builds up. The base layer torso provides a good deal of relief from this.

For the reasons I mentioned earlier, the real deal stuff is usually made with a DriFire torso, which drives the cost up. But there are plenty of Paintball or Airsoft-grade versions around that use good ol' flammable polyester, and these do just great for players who aren't made of money. I positively reviewed one version of this shirt from Helikon (a clothing line that Connor's Crypsis store will soon be carrying as a matter of fact), but since then Valken has also come out with their version of the concept called the Zulu Jersey. It's also available in a whole slew of colours and camouflage patterns, and I've been hearing good things about it.

The Helikon version has the advantage of built-in elbow pads, and a high neck that can keep your sling from chafing your neck (and protect your neck from paintball hits to a degree). Valken's shirt has the advantage of being more widely available. Of course what both versions have going for them is sturdier arms than a base-layer shirt, so you can go prone on your elbows or crawl through rough terrain without fear of tearing the sleeves to shreds.

Keep an eye out for our next installment of Beat The Heat, when we'll take a look at alternatives to tactical vests for Paintball play in hot weather.
Email Post
Labels: Gear How To Milsim Paintball Safety