I don't have a problem with people hurting themselves. If you want to look like a career long hockey player and lose all your teeth go for it. What I do care about is how the behaviour of not wearing proper face protection affects our sport. So I'll quickly outline why mouth injuries are possible in paintball, then move on to the meat of the matter.

If I did my math wrong, somebody please correct me.
-Image removed because of confusion-
Ever wonder why the industry worked so hard to move away from people just running around in shop goggles? Because it looks bad for all of us. It delegitimizes the game, and makes it look the great efforts that have taken place to make sure the game is safe never happen. Like it or not, paintball continues to exist at the whim of lawmakers and public acceptance. Because the vast majority of any populace does not paintball (and probably never will), we'll always be on the public opinion's chopping block if we really screw up. So, don't screw it up for the rest of us.
Detractor, "But Connor my team only plays in closed sessions, and we don't encourage others to not wear face protection, so what's the harm (you safety nazi douchebag)?"
Then why, pray tell, do I see so much promotional material from teams that claim this? You can't really by making that claim if you're putting out team or action photos of yourself, or if you're going on Youtube and making "look how cool our team is" videos (which is fine by itself), all without proper face protection.

Also, guess what? Kids look up to you. You've got cool gear, a cool "gun" and you're so damn cool, you just wear ballistic goggles! Anybody that's been paintballing long enough knows that there are scores of kids going out to play the game that hero worship at the drop of a hat, and would do almost anything to be included into some paintball cliques. If you're the kind of person that wants to be a good role model, you'll play the game as its meant to be played. 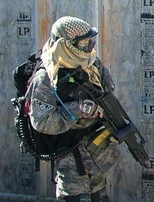 This paintballer subscribes to the mujahid protection plan,
"My kufiya will stop the bullets!"
Now to point a finger. Amongst all the demographics/regions I've observed, for whatever reason there is one in particular that seems to be the most likely not to wear proper mouth protection. Unfortunately, that group is here in Canada, and is Québec milsim players. Which is too bad, because the milsim scene in Québec is like no other, the teams seem very close to one another, and yet they're putting their existence in danger by not protecting themselves (both physically and legally). Here's my suggestion to those concerned about safety in Québec, implement a full mask clause in your S.O.P. documentation. In the end, the vast majority of you are protecting yourselves well already, why not make the minority conform so as to protect all our interests? Just a thought. If you read this and you're part of the milsim scene in Montreal and elsewhere, please bring up the subject to your teammates! Or post up here and tell me why I'm wrong.
If you have anything to add as to why people should wear full face protection, or if you have any stories you'd like to share, comment below and I'll amend the original post.
Email Post
Labels: controversy Milsim Paintball Safety