Is Paintball an Unwanted Bastard Child?

While the title of this article is clearly meant to grab your attention, it poses a serious question as to the nature and origins of paintball (as we know it). On this, the 30th anniversary of paintball, I might be somewhat of a pariah in saying this, but paintball doesn't appear to be held in as high of an esteem by its creators and original players, as it is by us (today's players). There are very few people in general that have remained active in the paintball community since its relative beginnings (although I'm fortunate enough to know a few, and I commend them), and there are many that seem simply soured to it. If you were to gauge paintball's worth by how much its creators have supported and nurtured it in the last 20 or so years, then you'd be sorely disappointed. Among those 12 players that played the first paintball game, none (to my knowledge) still play, and none have been involved in the industry since the 1990s. Now, a large part of that may come from the fact that paintball had a turbulent and sometimes iffy beginning, with plenty of legal and logistical problems plaguing it. However, could it be that people are generally inclined to become bored of paintball, particularly the playing aspect of it? Think about all the field owners, industry veterans and entrepreneurs that you know that make their living via paintball, yet seldom (if ever) find time to play it. I'm sure most of us know a few if not many. That's not to say nearly all paintball veterans tend to become disenamoured (excuse my neologism) with the game, but you'd be fighting an uphill battle to say that the vast majority continue to enjoy playing the game that they once loved. Typically those that invent something (or put a great deal into developing it) tend to place it in high regard, and are great proponents of it. But I really can't say this is the case with paintball at all.

What does that failing speak to? Is paintball's gameplay just not exciting/deep/appealing enough to maintain the average player's interest over the course of many years? Or is there something about the industry that causes people to find less enjoyment in the game over time?

And then another question should be asked, what use is it lauding the creation of a game that even the creators don't care for? And how many of you posted a story about the creation of paintball this weekend, yet haven't found time in months to actually play it?

I suppose the crux of what I'm getting at is (as ironic as this may sound) stop talking and... 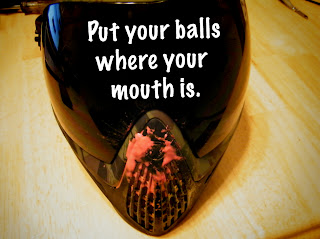 As always, comments (especially ones that provide other opinions) are strongly encouraged!
Email Post
Labels: Paintball