News From The Front: D-Day 2010 at Voodoo Paintball

September 5th, 2010 saw Voodoo Paintball hosting their annual D-Day event at their thematic field in St-Etienne-Des-Gres, Quebec. Nearly 300 players showed up at the event to re-enact the battle of Normandy, and the 101st Airborne Regiment's assault on the French town of Carentan.

Voodoo is close to the city of Trois-Rivieres (Three Rivers), which is about 1.5 hours East of Montreal by car. Trois-Rivieres is a noteworthy heritage site, featuring many monuments with a lot of history behind them. As the intersecting point of 3 major waterways in Eastern Canada (as its name suggests), it was strategically important outpost with a strong military connection. 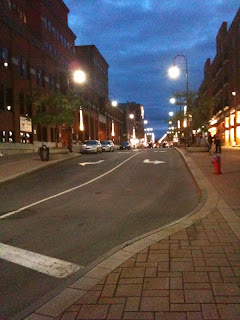 With this area being of such historical and military significance, it's the ideal place to re-enact a battle recognized as a turning point in military history!

Throughout this review I'll be using stock photos from the Voodoo Paintball web site to illustrate, as I was too busy keeping my head down under heavy fire to snap any pics of my own! Although Voodoo Paintball normally posts photos of every event on their site, for 2010 they posted only one short but intense clip (above), and offer a DVD featuring photos and video footage for $10.

The centerpiece of Voodoo Paintball is their Omaha Beach field, which at first glance looks a lot like the beach seen during the opening scene of Saving Private Ryan, complete with a white pillbox set high on the "cliff". 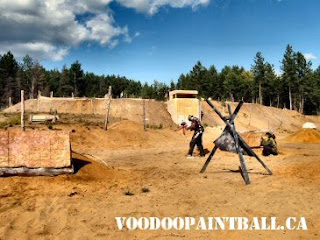 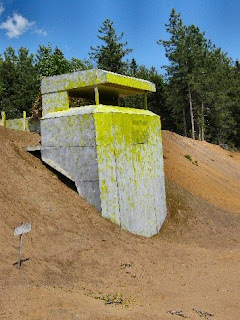 There are 3 ways to get to the top of this cliff, each one as deadly as the other. Facing the enemy, the left side features a trail leading up to a tunnel that accesses the cliff. If you can make it past the withering fire from atop the cliff, you'll still need to make it through the tunnel at the top, which is a fatal funnel. Near the middle of the cliff, just to the right of the large pillbox, lies another avenue of approach: A sand ramp. If you can make it across all the open ground in the center without getting hit, you'll still have to run up that sandy slope to make it to the top of the cliff. By then, your legs should be on fire, and you probably won't be able to make it any further anyway.

If you think it gets any easier on the right side, you're in for a surprise. This year Voodoo built a new feature on the Omaha field they call Pointe-Du-Hoc. Those familiar with World War II history (as well as Call of Duty World at War players) will recognize Pointe-Du-Hoc; it was a heavily-fortified cliff West of the Omaha landing point that the Allies needed to capture (in order to neutralize its artillery, which threatened the landing forces). At Voodoo, Pointe-Du-Hoc consists of a 50 foot-tall steep hill with a large pillbox on the summit. Surrounding the pillbox is a lot of flat ground where shooters can go prone and snipe attacking players.

Those lucky enough to reach the top in fighting shape still have to contend with a brutal trench network filled with fresh sand, which is again MURDER on the legs to run around in (adding to the realism and brutality of the battle). 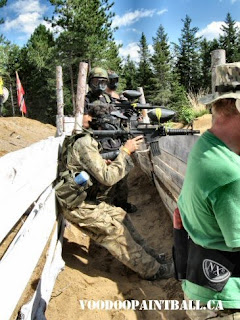 The builders have really outdone themselves here, adding in all sorts of interesting props like a tower overlooking the trench system, and replica anti-aircraft guns pointed skyward (made of wood and painted matte grey to look metallic). 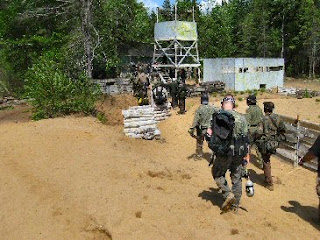 If this sounds like hell for an attacker, you're right! War is hell, and just like the real attackers at Normandy faced difficult odds and suffered heavy casualties, so do groups of paintball players trying to charge these defences at Voodoo. Still, the staff have offered some advantages for the attackers on the beach, just to even things out and not make it completely frustrating.

Unlike some other fields that hold so-called "D-Day" events, the staff didn't unrealistically litter the beach with rusty old scrapped cars, wooden huts, and other cover for the attackers. Instead, there are lots of sand dunes and other terrain features on the beach that provide dead ground to protect attackers from the hundreds of paintballs flying overhead. There's also a "disabled" APC lying derelict on the beach (made of wood of course), and players can take cover behind it or inside it (the back hatch is open, and there are benches on either side, just like in a real APC). 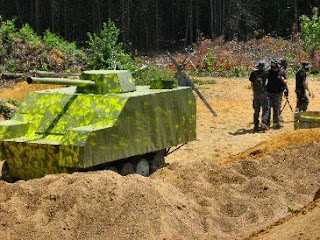 There are also X-style tank obstacles around the beach, which offer a little cover (but not much). In keeping with history, the Omaha field is a very dangerous place, with lots of open ground and very little cover! 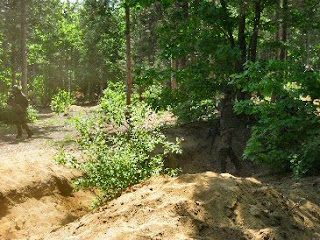 Once the Allies conquer Omaha Beach, their next step is to make their way to the town of Carentan. However, between the beach and the town lies a forest containing a network full of sandy trenches. The Allies need to push hard and be sneaky to flank the trenches full of German defenders, and make their way to Carentan. 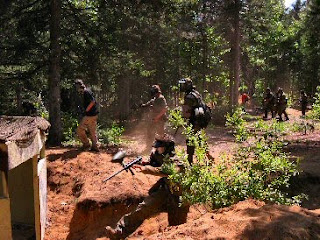 The French town of Carentan is the ultimate prize in the day's battle, but taking it isn't easy. There are several 2-story farmhouses on the edges of the town, and a good number of defenders holed up in these structures can keep the attacking forces at a standstill in the woods. 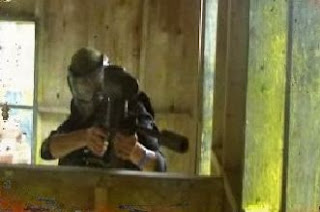 And once the Allies make it into town, they're still faced with clearing out the Germans house-to-house in intense battles at close-quarters. The structures are denser the further you get to the center of town. 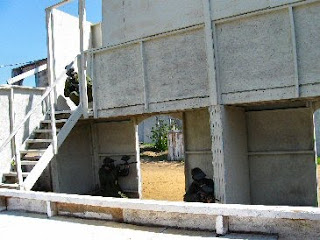 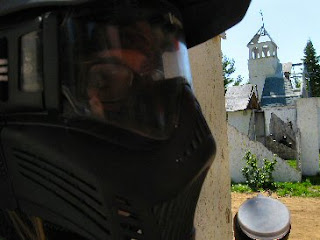 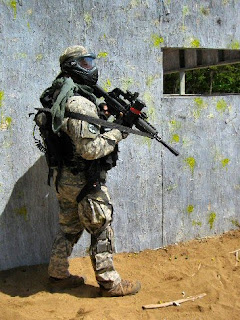 There are also some 3-storey structures there, including a church. That high ground allows a defender to dominate a lot of territory. 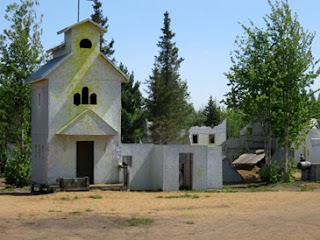 In typical fashion, the game ran on "paintball time", meaning the event started about an hour late. A large tent filled with folding tables and chairs was set up, allowing close to 300 players and staff to have a seat and wait (and wait, and wait) for the main briefing by the field owner. 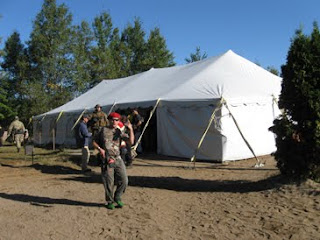 Teams were sorted and sent to their respective starting positions, with the objectives explained to each. The guys from PBL were on-site to provide air fills, tech markers, and promote the new .50cal equipment from G.I. Milsim.

Like most paintball parks, Voodoo Paintball is a field paint-only operation. The paint used is Draxxus Field, with the field's name printed on it, and the balls at this event were yellow, with a yellow fill. Despite actual D-Day obviously involving German soldiers, another field rule was that no Swastikas were permitted at the event. This is both out of respect to the millions of victims of the Nazis, and to avoid having the event become a magnet for neo-nazi groups to flaunt their colours.

On to the actual gameplay! One team started as the Allies in the morning, storming the beach from wooden Higgins boat replicas with real descending ramps. 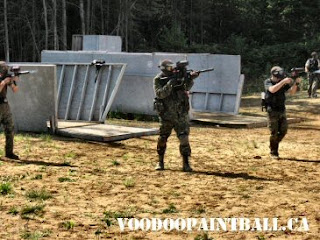 All respawns took place from the boats. As the game progressed, the attackers' respawns remained steady, while the German defenders on the cliff began to suffer declining respawns as their reinforcements ran out. With waves and waves of Allies continuing to attack, it was approximately 45 minutes until they reached the top of the cliff and overwhelmed the last of the German stragglers in their trench network.

After this game, a 45-minute break was held to allow everyone to refill paint and air (and to let the attacking players recover any feeling in their legs). With the break over, the Allies continued fighting through the woods, with the battle ending in the town of Carentan as lunch was called. In the afternoon, the roles were reversed, and the defending team in the morning became the attackers/Allies.

In a nice little surprise, lunch at this event wasn't pizza from a local greasy spoon, or burgers or dogs cooked on a dirty barbecue. Every player received a fat smoked meat sandwich cut on the spot by a meat-carving machine, accompanied by a bag of chips and a soft drink.


The Lowdown on Voodoo Paintball

What really struck me as a positive on the field in general was the degree of clearing that had been done on the grounds. While many fields feature rough terrain, and the owners leave it that way as part of the overall paintball experience, Voodoo's forest fields are almost completely free of hazards. You'd be hard-pressed to find a rock sticking out of the ground, or a tree root, or tree stump, and a nice layer of mulch covers the ground everywhere you look. With very few trip hazards, players can easily dive, kneel, and run without fear of injury, leading to a more intense day of play. On the Omaha field, fresh sand was laid down for the event, which led to an environment where you could easily dive to avoid fire, without having to worry about being sliced open by a rock on the ground.

The downside to all this sand at Omaha however is that after one of those dives, you could look up to find your barrel full of sand. A carbon fiber barrel would be ruined at this event, and a conventional barrel still risks being scratched up. As long as you don't dig your barrel into the ground you should be ok, but if you care about your marker, do everything you can to keep it clear of the sand. (I know that sand at a paintball field kinda sucks, but come on, this is D-Day. D-Day IS sand!)

The reffing at the field was top-notch, with the many referrees watching the players like hawks. They were quick with the paint checks, and strived to keep things fair. At one point while prone, during the assault on Carentan, I was called off by a ref who noticed a break on my air bottle on my back (which I hadn't felt of course). He was very polite and respectful about it, which is a nice break from refs who automatically assume you're cheating. 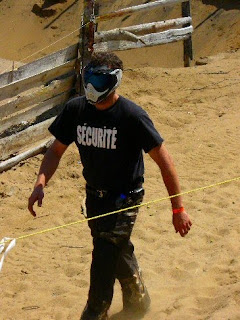 There was plenty of parking at the site, and the covered tent area made for a nice place to sit and tech a marker at a table if you needed to.

One thing I'd like to call out as a negative is the extremely long walk back to your car and the staging area from any of the D-Day fields. Although the distances involved weren't nearly as bad as at Arnold Paintball, it was definitely aggravating. A shuttle service, say in a trailer pulled by an ATV along the main trail, would've been appreciated. Besides, paintball field operators need to understand that during all that time players are walking back and forth, they aren't playing and shooting their field paint (which is what makes them the real money). As a redeeming feature however, air fills were available in the main deadboxes for each team - so air was always close at hand.

One last (minor) gripe I have with Voodoo is their decision this year not to post photos of the event on their site. Event photos are a good marketing tool for any field, and by withholding them for a fee, they're not doing themselves any favours. I would have liked to have shown our readers a good photo of the Pointe-Du-Hoc installation, but this was only built this year, so the photos of past years' events don't feature it.

Despite some minor issues (and what paintball event DOESN'T have minor issues?), I found Voodoo Paintball's D-Day event to be a fantastic experience. It was difficult to be sure, but it was also literally the BEST time I've ever had playing paintball! I'm not saying this lightly, as I've been to many big games at many fields throughout Ontario and Quebec.

If you're serious about Milsim paintball, and enjoy re-enacting historical battles, this event is a MUST for you! The next organized D-Day event at Voodoo Paintball takes place on Saturday June 4, 2011.