Spotlight on the Helikon Combat Shirt 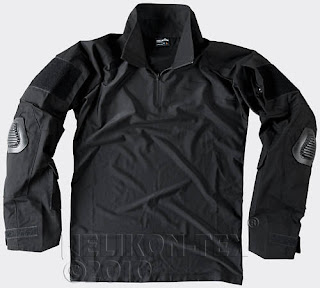 A couple of people at Return to Craig 2.0 were asking me about a combat shirt I was wearing that day, so I decided to post a quick review of it.

The Helikon-Tex combat shirt is a replica of the Crye Precision Combat Shirt AC, which retails for $180 USD with the elbow pads included. In contrast, I was able to pick up Helikon's replica on eBay (from seller hwesta.eu) for $63 USD shipped.

The combat shirt is a relatively new concept in BDUs, invented and recently patented by Crye. It combines BDU-style sleeves with an Under Armour-style, moisture-wicking material over the torso portion. This allows a soldier to stay cooler under a tactical vest or plate carrier, which is a Godsend in arid theaters of operation. For added measure, Crye designed the shirt to hold removable foam elbow pads, with hard plastic caps on the outside for additional protection. Here's a diagram: 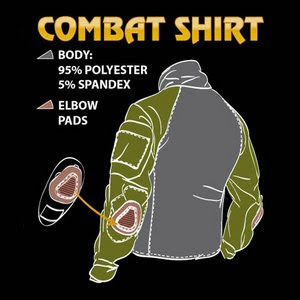 While the external plastic caps on the Crye elbow pads are smooth, Helikon uses an elbow pad with ribbing on it, as extra protection against slippage. 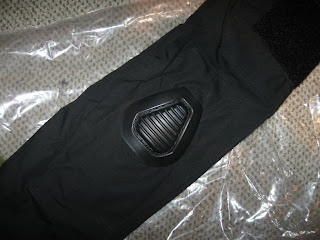 This design was "appropriated" from another company making the elbow pads for their own combat shirt, OPS: 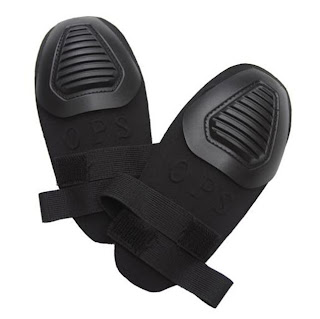 Anyone who's every played a full day of paintball in a tactical vest knows how badly you can sweat under one. Even wearing a vest with a mesh base can still trap enough heat to turn your torso into a soaked, sweaty mess. In July heat, it's almost enough to make you want to ditch the vest and throw on a speedball jersey, and run and gun with the tank on your gun!

A combat shirt helps out very nicely with this sweating problem. The lighter, moisture-wicking fabric tends to do a good job at pulling the sweat away from your body and into the material, were it can evaporate easily. Not only that, but the fabric is extremely soft, and prevents chafing that can occur under the weight of a loaded vest.

The high-neck collar on the shirt keeps a sling from digging into your neck, and even provides a measure of protection from paintball hits to that area. The built-in elbow pads are great for going prone, or for crawling under fire.

That being said, there are a couple of things that need to be mentioned about this garment. First, the light material on the torso can be fragile, so the shirt needs to be machine-washed on the delicates setting. This light fabric also won't take away any of the sting from a paintball hit like tougher BDU fabric, so if you throw your arm up to call yourself out and the balls keep coming in, you may be in for some pain when you get hit in that tender underarm area (trust me, I should know!). Lastly, you need to protect the light fabric from contact with the rough side of Velcro, as that can stick to the fabric and leave scuff marks when you "rip" it off.

The Helikon combat shirt is a good airsoft-grade replica of a great concept by Crye Precision. Its affordability and usefulness in the summer heat make it a fantastic piece of equipment to add to your loadout.


(At this time, aside from hwesta.eu, the only Internet retailer I've found for this product is Military 1st).