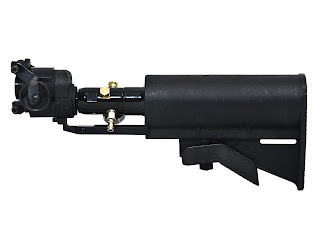 Options: A5 and Milsig versions, can come packaged with a inline On/Off threadsaver as well as a 13 cubic inch 3000 psi air tank.

Pros: I never want to go back to a remote line again. Don't get me wrong, when you have the appropriate remote line and line cover you'll hardly notice it's there. But you still do notice it. Using the MATS on a Milsig gives you the feeling having a completely self-contained milsim marker. No hopper, no conspicuous air lines, and no gigantic air tanks hanging off the bottom of your grip. The whole idea of having an air tank as your stock isn't new, but it seems to have been forgotten by many of the current woodsball/milsim marker makers *coughtippmanncough*. Of course, if that's not your thing then you can still run a remote line through the asa on the MATS (as it uses standard asa threading) or put a larger tank on your marker for more extended games (of course then you'll need more mags). Running six mags at a time, I never ran out of air before I ran out of paint, so Milsig's estimation of 120 shots is probably fairly accurate (I was shooting at 280 fps I believe).

A good how-to for setting up the MATS.
Set-up was easy for the most part, but I accidently nicked one of the vital o-rings when setting it up (luckily Milsig includes a bunch of replacements with the package). You don't need any special tools (a wrench, which you should have anyways), and there aren't too many ways you can mess up the installation.
Cons: Aesthetic nazis (Godwin's Law, had to happen eventually) might have issues with the airline on the side of the marker. Frankly, it doesn't bother me as it allows you to access it easily if there are any issues with it, but I'd like to see Milsig eventually move to an internal airline option. While the cost of the MATS by itself isn't too hefty, the necessary addition of an air tank bumps the cost over $200, which might make the system inaccessible to new Milsig owners. 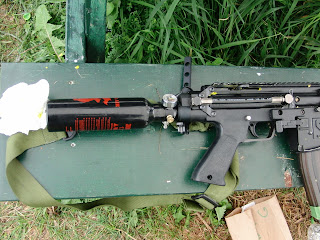 Shown with a Guerilla 13 cubic inch 3000 psi tank.
Overall: Easy to set-up and use, if you're tired of your remote line and own a Milsig this should be your first upgrade purchase. Now speedballers aren't the only paintballers that have a tank-on-marker option that actually makes sense. The completion of this idea would be to completely integrate the airline with the marker, much alike how some speedball markers have elegantly integrated airlines running though their frame. The price is what you'd expect, and I'd say it's worth it.
Email Post
Labels: Accessories Milsig Milsim Paintball Review