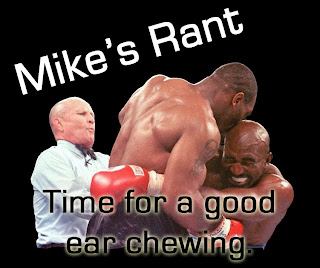 Attackers have it pretty rough. Any force attacking a defended position is already at a disadvantage. They have the hard job of suppressing the defenders, exposing themselves from cover to advance, and braving enemy fire to try and gain a flanking position. And if their objectives go beyond simply defeating an enemy force, and include seizing some control point or accomplishing a specific task behind the enemy lines, attacking becomes even more difficult.

Meanwhile, defenders have it easy. The advantage is overwhelmingly with them, as all they have to do is sit tight to their cover and open fire on any attackers who expose themselves. Smart defenders will have also used other factors to their advantage, such as funnelling or strong points, a position on high ground, a layered defence, and a reserve to fill in any gaps. All else being equal (although luck can play a part), well-led defenders will always win a battle against an equal number of well-led and equally-skilled attackers.

So why are paintball Attack-and-Defend games overwhelmingly played with equal numbers of attackers and defenders?

Playing with equal forces leads to stalemates at the very least, and slaughter of the attackers at worst.

Here’s a real-life example of how badly some paintball fields run Attack-and-Defend games. Back in July of this year I was at a D-Day scenario game where the teams were even, which was ludicrous given that the attackers faced a tough battle uphill, with only 2 realistic avenues of attack (fatal funnels). To make matters worse, the defenders were given a tank with twin fully-automatic A5’s, which was for all intents and purposes invincible. In addition to capturing the hill, the attackers were given some sort of objective to plant a bomb on top of some structure on the hill. 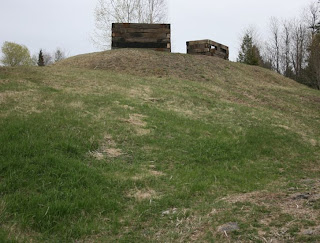 Of course, under these circumstances, this “D-Day” landing looked more like the crushing defeat of the allies at the Dieppe beach landing, with the allied forces being slaughtered and pinned down behind dead ground and minimal cover by the shore. And whatever that objective was that was given to the attackers (I can’t remember what it was, because 30 seconds in we were getting pinned down so bad that everyone just forgot about it), there was no hope in hell of accomplishing it. Needless to say, the results were very frustrating for the attacking team, and the defenders got to have all the fun.

Now to be fair to the organizers of this game, this was their first D-Day event, held on a brand new Omaha-themed field. And in general, most paintball field owners don’t have enough knowledge of tactical or military matters to recognize there’s a problem. Though on the surface it might seem “fair” to an organizer to split the teams equally, a rule of thumb for military operations is that for an attack to be successful, the attackers need to outnumber the defenders 3 to 1. (Now, it’s been a while since I’ve been in the Infantry, but in those days those were the numbers; unless something’s changed drastically since then, they most likely still apply). However, stacking the teams this drastically may upset some players, and may still make it unfair if the defenders are novices who don’t understand the principles of a good defence.

So how exactly does a paintball event organizer “level the playing field”, so-to-speak, and make for a FUN (and fair) game for all involved?

One method to improve the attackers’ chances is to give them the advantage of superior equipment. In practice this means stacking the attacking team with players wielding full-auto markers and speedball guns (and encouraged to fire full-auto), while the defenders are allowed to fire semi-auto only. (Field owners would love this option, because for field paint-only operations, full-auto = $$$). 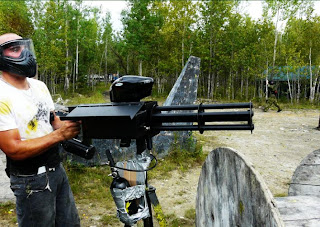 If the game is a Milsim event, you could put limited-ammo/tac-cap, mag-fed, and pump players on defence, with the attackers using semi-auto, hopper-fed guns. 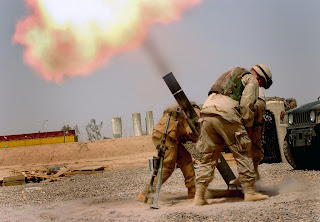 Another alternative to give the attacker an advantage is the option of one or two mortar strikes during a game. We’ve all been there, trying to attack a position, while a couple pesky defenders tuck in tight behind a bunker and pin everybody down for the whole 15-minute round. But with the mortar strike option, the team leader can call in a strike on any given bunker by relaying the coordinates (telling a referee which bunker they want hit). The referee then walks up to that bunker, and tells anyone taking cover behind it (whether that’s 1 or 5 players) that they’ve been blown to bits and need to walk off!

Another advantage to this perk is that when the defenders know that a mortar strike is available to the attackers, they’ll space out more to avoid getting taken out in a big group. With the defenders’ lines thinned out by this, the attackers will be better able to punch through the lines and flank them. Again, the limit of mortar strikes needs to be set at 1 or 2, just so that they’re used wisely and don’t get abused.

An alternative to give attackers some help is to have a 50% respawn rule for them. While the defenders get eliminated normally, and spend the rest of the round in the deadbox, the attackers respawn when half their team gets eliminated. This simulates constant waves of reinforcements arriving for the attackers, and encourages purposeful risk-taking and Banzai-type charges by them; they’ll know that if their courageous attacks don’t work out, they’ll be back to try again in a couple minutes.

However, just like the mortar strike, these respawns at the 50% mark should be limited to 1 or 2, because if they were infinite, the attacking team would ALWAYS end up winning eventually.

Declining respawns are the way to go if your scenario dictates that one side has to win the round for the next game to take place, but it also works for Attack vs. Defend games. Declining respawns mean that both sides start re-spawning every, say, 10 minutes at the beginning, but eventually one team starts taking longer to respawn (15 minutes, then 20 minutes, etc). This was what was done at the Voodoo Paintball D-Day in September, and it worked out beautifully! 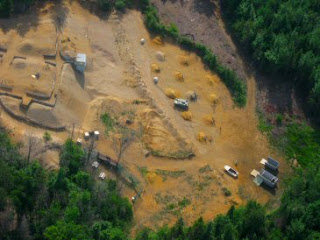 At first both evenly-matched sides faced off, and of course during the first few waves the allies got slaughtered as they came off the boats and/or made their way up the beach, mirroring history. However, as the German reinforcements were slower to join their forces at the beach, and eventually ran out (again mirroring history), they fell to the near-unlimited waves of Allied attackers pouring out of the Higgins boats. Both times that the battle was played (in the morning and afternoon), after about 45 minutes of brutal charges and eliminations the Allies made their way to the top of the sandy cliff, and swept the trenches clean of the last German defenders. 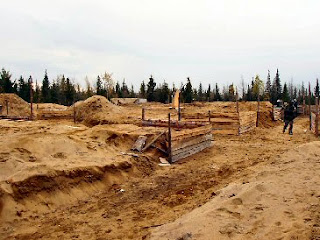 A MUCH different outcome than what was seen at the D-Day/“Dieppe” game I described above!

Attack-and-Defend scenarios have the potential to provide a lot of high-adrenaline fun for both sides, IF they’re done properly. Done wrong, they could leave you with a lot of frustrated players. However, when they’re done right, using perks and handicaps properly, and finding the right balance for fair play, people will be talking positively about their experiences at your field long after they’ve left!
Email Post
Labels: controversy D-Day Paintball Scenario