One Step Closer to Adaptive Camouflage 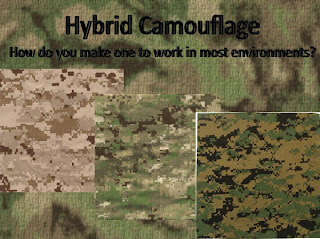 Hyperstealth recently put out an interesting press release, that seems to claim that we are now one step closer to the advent of adaptive camouflage technology. Here's the meaty part of the release (from Hyperstealth's website):


"(Vancouver, B.C., December 1, 2010) Guy Cramer, President/CEO of Hyperstealth was asked to make a presentation on Fractal camouflage at the International Camouflage Symposium called "Camouflage takes Centre Stage" in Brussels in October 2010. His presentation was titled "Fractals in Camouflage and the Future of Adaptive Materials for Mobile Concealment". At the end of the presentation, the audience was provided a video glimpse of SMARTCAMO™ technology Cramer had developed which surprised even the camouflage experts present in attendance who claimed this was 5-10 years in advance of where military R&D programs were currently at.
The video was of an actual camouflage cloth around his arm, which could change colors between Desert and Woodland and anything in-between, the colors also showed the ability to become brighter than the desert colors for use in a late fall climate or even snow. Cramer announced at the end of the presentation that the video was to be released on the HyperStealth web site after the conference.
Since that presentation he has been requested not to release the video to the public at the request of the U.S. Military"
Awesome if true, but it has already been established that Mr. Cramer is, well, how to put it... a bit of a wackjob. Which isn't to say you shouldn't believe anything he says, you should just take everything with a bit of salt. Those reading the full article will realize that soon enough.
Email Post
Labels: Camouflage News