With Christmas just around the corner, hopefully you've taken care of your holiday shopping (save for that last-minute Christmas Eve emergency we all seem to have). But if you're the type who buys themselves a present at Christmas (and why not?), then you owe it to yourself to pick up something for your Milsim Paintball or Airsoft collection. But what do you get for yourself when you've already blown your year-end bonus on everything you could possibly need for next season?

We at Grey Ops have come up with a few ideas for last-minute cheap toys to enrich your Milsim gameplay - because why should kids have all the fun? Check 'em out, then grab your wallet and head out to do some holiday shopping for yours truly. Go ahead, you deserve it. 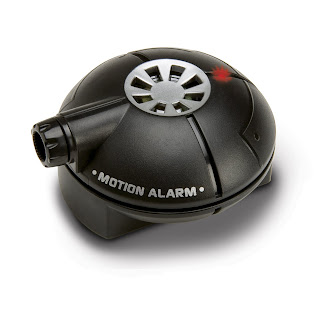 Little toy motion sensors usually sell for 10 bucks or less, and can be pretty handy for Milsim play. They typically use lasers to detect movement (when the laser beam is broken by someone walking through it, the sensor goes off with a shrill alarm). Depending on the brand, they'll work anywhere from 5 to 20 feet out. Because they use weak toy-grade lasers, they may not function in all lighting conditions.

For some REAL fun, pick up 2 or 3 of these babies. They'd make a great tool in CQB play at facilities like CQB Tactical Paintball or PRZ, where you can set them up around corners and in doorways to alert you that opponents are approaching. Alternatively, in scenario play you could set some up around your team's assets, with the alarm sounding if the opposing force is moving up on them as objectives.

In general outdoor play, the sensors can be set up at fatal funnels or along trails, to signal the approach of the other team. Last but not least, lone wolf "sniper" players who like to lay low can set up a web of them behind them while they lie in wait, to warn against other players sneaking up behind them for a barrel tag. 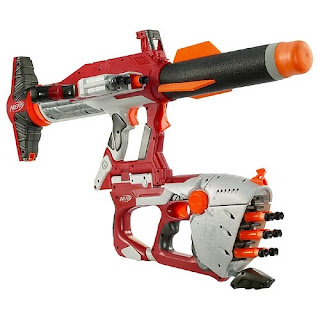 The Nerf N-Strike Launcher package contains 3 separate foam launchers in one. The large top one is what we're going for here, as it could be used as a cool anti-tank Milsim launcher. The colours aren't "tactical" by any standard, but it's nothing a good coat of Krylon Camouflage spray paint in the right places can't fix.

Once painted up (and with the gun "pumped" with the stock back), the N-Strike launcher makes a nice one-shot, shoulder-fired LAW-style AT system, able to launch the included "Mega-Missile" foam rocket out to 60-80 feet. The rocket is of course re-useable, but you can order additional Mega-Missiles from Hasbro (or find them for sale on eBay).

The N-Strike launcher makes a great scenario tool. Not only can you use it credibly in the anti-tank role (in place of more expensive launchers), but you can use it for certain hardened-target scenarios. An example of this would be your team being tasked to cover and escort a 2-man rocket launcher team, so that they can get close enough to a hardened Al-Qaeda bunker to hit it with a rocket.

A review of the N-Strike can be found here.

Next on the list is a product from an outfit that we at Grey Ops love to bash. Those of you who followed our Comments-Section debate with Centurio Products Group back in July may remember how we suggested that their "Lighting Less-Lethal Weapons" were better suited to LE training or Milsim use. Of course, they got mighty pissed off at this, and would probably take offence to us listing it here as a "toy". So let's see how effective their BAD Airy (advertised as a viable alternative to a Flashbang grenade) is in the real world:

The light isn't anywhere near overloading the camera's CMOS sensor, and it's not loud enough to cause any distortion in the microphone, drown out the prankster's laugh, or even get much of a reaction from the snoozing prank-ee. But it IS annoying, I'll grant it that!

And while the BAD Airy doesn't quite cut it as an alarm clock, we at Grey Ops maintain it would still be great fun to use as a distraction device for room-clearing in CQB Paintball or Airsofting. As yet the company hasn't marketed it for this purpose, but here's hoping these are available on the shelves of your favorite big-box retailer by next Christmas!

The Spy Net night vision goggle is an updated and more ergonomic version of the EyeClops, the hideous night vision toy that came with the Call of Duty: Modern Warfare 2 Prestige Edition. While most people were understandably skeptical about a toy being able to provide meaningful night vision, they were pleasantly surprised when they got to try the EyeClops out. In fact, during a 2010 show on Paintball night gaming, Mike from TechPB personally recommended the EyeClops:

Although a working set of Gen 1 digital infrared night vision goggles for under $50 is a dream come true, the unit does have some drawbacks. First of all, because of it's bulky size it's really not head-mountable (unless you're really good at making a DIY setup). There is however a neck strap on them, that allows you to carry them around your neck like binoculars. So although you wouldn't have always-on night vision like in your favorite first-person shooter video game, you could stop and look through the goggles to scan the way ahead, then let them hang around your neck while you're on the move, then repeat.

Another con to this bargain is that the visibility without the built-in infrared illuminators is fairly poor, meaning you have to turn the IR emmiters on. This gives you a viewing distance of a good 50 feet, but makes the cherry-red IR LEDs on the front of the goggles visible to your opponents in the dark. However, this IR glow can be hidden using a tip I learned from Connor (which I'll outline in a future post about paintball night games).

If you have any good ideas for kids' Christmas toys that would fit into Milsim play, be sure to let everyone know in the Comments section below!
Email Post
Labels: Accessories Airsoft Gear Holiday Launcher Less-Lethal Light Milsim Paintball Scenario