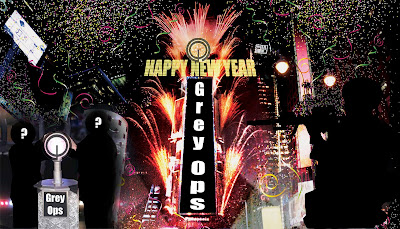 2010 was a pretty wild year here at Grey Ops. Despite all the growing pains, late nights, and outbursts of cursing in front of a computer needed to keep a not-for-profit blog going, we managed to make it to our 1-year anniversary and beyond...with style!

If you've been following us for a while, then you know that we like to give our readers a break from the usual. To that end, we started regular features that keep this site FUN. Features like theme weeks, Ugly Milsim Markers, and Mike's Rant of the Month. We highlighted beautiful Milsim markers that were pure works of art, and some that weren't quite so hot. We reviewed lots of gear, from the popular to the obscure, and probably told you more than you ever wanted to know about tactical footwear for Milsim Paintball during Boot Week.

And contrary to other Milsim blogs that are all about product reviews and gear for a Milsim look, Grey Ops took the bold step of addressing the subject of proper tactics. We posted numerous articles to help you become a lethal player in Close-Quarters Battle settings, and other tactics-focused posts to give you an edge in the woods and at Big Games.

Through it all we've also called out certain companies in the biz on their BS, and provided you with breaking news on new and upcoming product developments and general happenings in the Milsim Paintball world. Between all of this we've managed to thoroughly review some very unique Paintball fields and games in Ontario and Quebec, in our "News From the Front" feature articles.

Not too bad for a not-for-profit blog run as a hobby, no? And we're just getting started!

2011 promises to be another exciting year at Grey Ops. Not only will we be continuing our regular features, but we'll be adding some new ones as well. Here are some in the works:

Video Reviews: On a regular basis, we'll be reviewing videos of interest to Milsim players. Keep checking back here for reviews on Magpul Dynamics instructional videos, OPSGEAR films, and other productions with relevance to Milsim Paintball.

Pistol Tactics: 2011 will bring a series of articles focusing on the much-neglected area of pistol-specific tactics for Paintball players.

Tactical vs. Practical: This series of posts will focus on Milsim weirdness out there, and the need to balance a Milsim look and playing style with the realities of Paintball play.

And the best part to come: MORE PRODUCT GIVEAWAYS!!! Somehow we've managed to convince several companies to throw some of their promo budgets in our direction, and you, the readers, will be reaping the rewards!

But you know what? You all deserve it. You readers are our inspiration and raison-d'etre. Our extreme interest with Milsim Paintball (what our frustrated girlfriends call "obsession") is only half of our driving force; your encouraging comments and continued readership is the rest, and it's what keeps us posting. Thank you all for your support in 2010.