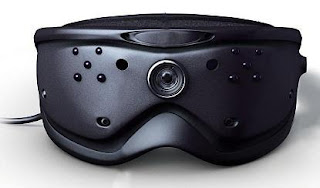 Disclaimer: In the Future of Paintball series, we at Grey Ops take a look at a promising new trend or technology that may affect Paintball in the near or distant future. As Futurism is a difficult science, and we don't in any way consider ourselves "Paintball Futurists", this recurring feature is for entertainment purposes only.

In a previous installment of Future of Paintball, we took a look at how LCD technology currently in use could revolutionize Paintball goggle lenses in a few years. Well how sick would it be to be able to swap out your goggle lens for one with built-in digital night vision technology? We may just see that soon enough, if products like Paulson International's DNVG-1 take off.

Paulson International Ltd. saw its start way back in 1947, as PAULSON Manufacturing Corp. From a quick look at the information on the company's web site, it appears that they started out with a specialization in face-protection, but branched out to PPE (Personal Protective Equipment) for industrial, firefighting, and sports safety, as well as for military and police operations. Today the Temecula, California-based company produces a variety of protective products for several industries.

Recently, Paulson developed a line of digital infrared goggles, small and light enough to be worn under a protective visor (in keeping with the company's PPE specialty). For those unfamiliar with digital night vision, the principles behind the technology are much different from traditional night vision. Whereas traditional NV uses image intensifier tubes to amplify ambient light, digital NV uses what's essentially a digital camera CCD sensor that's extremely sensitive to light to create an image, then displays it on an LCD screen for the viewer. Instead of the green picture seen with traditional NV, the image comes out in monochrome, similar to Gen 4 NV devices (which use a different tech altogether - white phosphorus technology). Because there are no tubes to fry, digital NV devices can be exposed to bright lights and flashes - just like on a digital camera, intense light knocks the image "off-balance", but the image quickly recovers and renders a picture. They can even be used in broad daylight, if one happens to be wearing them when emerging from a dark building.

However, digital night vision technology is still in its infancy, and it'll be years before it surpasses Gen 3 or 4 units in performance. Its main drawback is that it has a weak "recognition range" on its own. It's heavily dependent on adequate illumination to give a useable picture, and doesn't see very well into the distance unless you provide some long-distance lighting. In practical terms that means using infrared lights and lasers; IR light at certain wavelengths is invisible to the naked human eye, but visible to digital cameras and night vision devices of all kinds.

Here's a video of the Paulson DNVG-1 in action. Note the infrared light projected by the goggles (at 32% power, then at 100%) being reflected off the operator's forearms as he's firing at a pitch-black shooting range:

Unfortunately because the state-of-the-art in digital technology doesn't really compare with current 3rd and 4th generation conventional night vision devices, I don't see this product being widely accepted by their target market (military and law enforcement) anytime soon, unless it's sold at a bargain price. Current Gen 3 units retail for $3,000 USD and up, so they might have a chance if they come in at around a third of that price or less. The company's site doesn't currently list any pricing info.

Of course, if some kind person were to point this post out to Paulson, maybe they could be convinced to woo the Paintball and Airsoft markets with this product. With the battery pack being carried externally, and with its durability, small size, and slim form factor, a variant of the DNVG line could be designed to pop into the housing on a highly-popular Woodsball goggle (say a JT ProFlex). Of course the resulting unit would have to be ASTM-certified to the impact standards of a Paintball lens, but this should be no big deal to a company that's been designing tactical and industrial eye protection equipment for over 60 years. At the very least, they would make a killing marketing this to hikers and other outdoors types that like to do their thing at night.
Email Post
Labels: Accessories Airsoft Future Gear Goggles Law Enforcement Military Milsim News Paintball Science