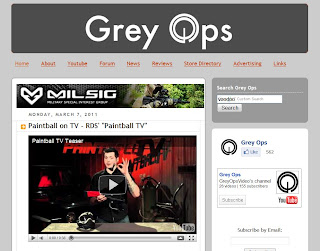 As Connor posted recently, the Quebec TV sports network Reseau Des Sports has begun airing a program called "Paintball TV" in French. Those with RDS as part of their cable package can catch the show at 5:30pm Eastern time every Monday. For the rest of us, unfortunately the pilot episode can't be viewed online, but episode 2 onwards will be available on YouTube thanks to user FlashQC. Episode 2 has been uploaded (thanks to Grey Ops reader Max for bringing this to our attention), and can be viewed below in 2 parts:

For those who don't understand French, here's the gist of the show: The host goes to Voodoo Paintball and speaks to the owner about how awesome the place is (I agree). Apparently the staff is always retooling the fields and their structures in response to player suggestions and complaints, to make things more fun and balanced. So a player coming back every couple months would notice changes every time. A little sidebar about Paintball safety (mask, freeze rule, and barrel covers) is aired. The host then talks to the captain of Team Kamikaze at Skorpion Paintball in Laval about their win at the CXBL Richmond Cup in Orlando. He says that the team was pleasantly surprised to have taken the cup, when they considered themselves lucky to make it to the tournament in the first place. The host then meets with a staff member of Mirabel Paintball's Impact Proshop for an intro on mechanical markers. Next he's back to Voodoo to talk about the field's D-Day landing scenario, and the declining respawn system they use for it. Then it's back to Impact Proshop for a quick intro on electropneumatic markers. Then it's a wrap!

The show has a good flow to it, a great host, a decent music track, and of course lots of interviews with common Paintball-playing folk. Oh, and the word "Adrenaline" is used a lot throughout the program.

Paintball TV seems to be a right decent program that does our game justice, and I encourage everyone to check it out - even if you have trouble understanding French. Even with the language barrier, the visuals and editing are interesting and slick enough to keep the attention of even a casual Paintball enthusiast. I'll try my best to provide more of my speedy translation services in the future, and (time-permitting) keep up with the releases of the episodes.

*The General Rating is based on a film's production qualities, such as editing, presentation, and story if applicable. The Grey Ops Rating is based on the subject material as it relates to Milsim Paintball, its relevance, and its training/educational value to casual and serious players of the game.
Email Post
Labels: Canada Paintball Quebec Video