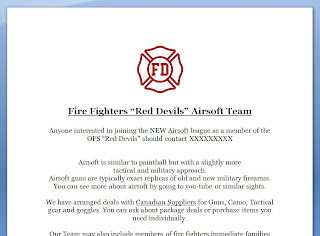 Airsoft has been a bit of a hot topic on Grey Ops recently, which is why I found it timely that I received the above letter in my inbox this past weekend. Apparently a group of firefighters in a big city near me are putting together an Airsoft team/league for 2011.

Now what pissed me off about this is not that firefighters spend all of our tax dollars washing their personal cars and cooking spaghetti & meatball dinners for each other every shift. Nor was it the fact that firefighters get hotter chicks. No, what really set me off was the part of this letter that read "Airsoft is similar to paintball but with a slightly more tactical and military approach".

What gives? Airsoft doesn't have a monopoly on tactics and a military approach! And despite Airsofters being all decked out in Chinese imitation gear and near-replica firearms, plenty of Milsim Paintballers game with all of that stuff too. If this person is referring to teamwork and tactics, well both games (I hesitate to call guys running around playing soldier a "sport") have good teams and bad teams, with good tactics and bad tactics. Hell, despite all the flashy gear, some Airsoft teams showing their stuff on the net are an embarassment to tactics in general, pointing their guns at their teammates' backs, standing in front of doors they're about to breach, and other rookie mistakes that would never fly with real-world operators.

Mind you, a lot of Paintballers on YouTube also seem to possess the tactical knowledge of Russian conscripts on their second day at boot camp, so I'm not singling either activity out. In my opinion, neither game is "more tactical or military" than the other - it all depends on who you're playing with and what the overall circumstances are. There are plenty of kids playing Airsoft in the woods right now in nothing more than jeans, windbreakers, and safety glasses - which you have to admit, isn't really a tactical or military approach.