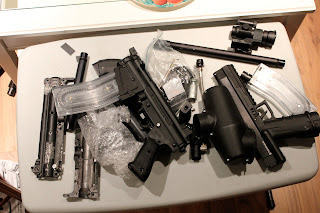 There's one thing I'd like to clear up before I talk any more about the MK5 Evaluation Kit. Certain unnamed members of the paintball media pack took it upon themselves to "review" this kit in a very public and interesting manner. These kits are not review kits (which will come along later) and the fallout from them having been publicized as such has been significant. Sales have dropped significantly with one RAP4 dealer I've spoken to immediately following the "review(s)", and it's been a PR nightmare for RAP4. This was an excellent opportunity for paintball media members and prolific forum members to provide public (at RAP4's bequest) feedback and evaluation of pre-production products, and its something that hasn't really been seen in the paintball industry to this point. Hopefully RAP4 (and other manufacturers) won't be discouraged from this excellent means of testing in the future, because it really does benefit the consumer in the end. Short version: "Don't ruin it for the rest of us." 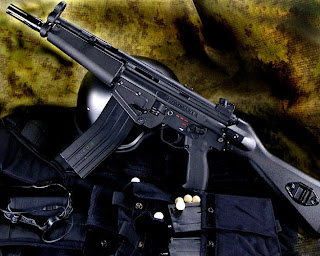 My overall opinion of the kit is very favorable. I had a few problems with it when first playing with it, but that was rectified in later testing. It turns out it wasn't the conversion kits fault but more a crappy regulator from Guerilla Air. Once I upgraded to an 850 psi output (with a different tank), I had no problems with the kit at all. Because of the nature of the kit, the only real limitations of it are the limitations inherent in the A5 itself. One issue, the mag latch, that plagued my kit as well as others' was one that RAP4 recognized almost immediately. For the final production model the magwell will be of a polymer construction (as opposed to the metal of the evaluation kit), and the issue should be rectified. Even then, the issue (which doesn't occur all the time) can be rectified by the user by firmly tapping the mag upon insertion (which many mag-fed users do in the first place, because of the unreliability of paintball mags).

Oh yeah, I also broke a plastic part on the cocking handle. I could really care less about that, it's a Beta. If something didn't break at some point or another I'd be concerned that the whole testing was just a publicity stunt as opposed to legitimate testing. 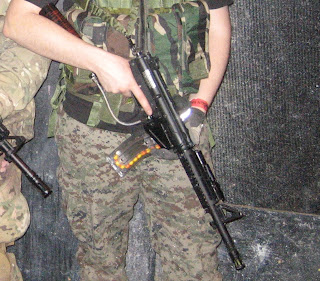 Picture taken at Action 500 in Montreal
The biggest thing the kit has working for it is accessibility (click here for my assembly video). Anyone that has owned an A5 for a short period of time will be able to put this kit together and use it without instructions of any sort. Of course you can always feel free to enlist a mysterious and concealed friend to put it together for you, whatever floats your boat. If RAP4 irons out the kinks that testers found and the other conversion kits perform equally as well then the conversion kit platform will be a huge powerhouse. I'll probably make a few people angry by saying this, but even if RAP4 takes a few more months than initially thought to get the kits ready for production I'll be very happy. I always prefer a more comprehensively and meticulously tested product to a rushed one. 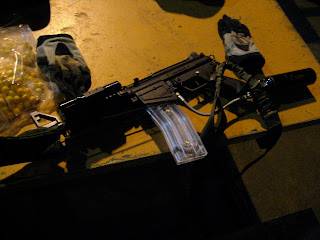 Thank you RAP4/TACAMO for giving Grey Ops and other groups this great opportunity. Hopefully Beta testing becomes more commonplace in the paintball industry, it gives manufacturers an excellent means of rooting out all the bugs in their product, and lets end-users have a say in the final product as well.
Email Post
Labels: Milsim Paintball RAP4 Tacamo