Skip to main content
Labels
Posted by Connor May 25, 2011

Sport Smoke has run giveaways in the past, but until now they've been for the United States only. Myself and others had mentioned several times to them that they should run the contest for both the United States and Canada, and wouldn't you know it, they did it! 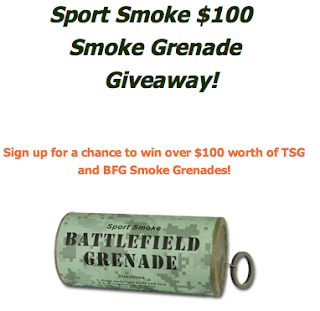 I saw Sport Smoke grenades in action for the first time this past weekend at the Hurt Locker 2 scenario held at PRZ in Picton, Ontario. I have to say, they worked better than I thought they would. My only gripe is that the retail prices for these 'nades is a bit over the top. Thankfully you have this contest to enter and win some freebies! Take note that the contest is only available to those that are 21 or older (I'm assuming because of the pyrotechnic nature of these devices).