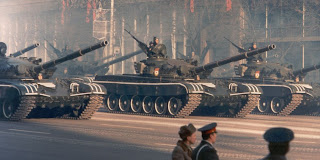 CANADIAN PRESS: Republic of Krajnika State Television announced today that it had shot down a NATO aircraft taking part in Operation Overwatch. Translated from Old East Slavic, the communique stated:

"Comrades of this great nation, today the glorious soldiers of our air defence brigades scored a great victory for the Republic. A cowardly aggressor invading our airspace was brought down by their missiles and guns, and he will drop bombs on us no more. The aggressors have been shown that their interference in our sovereign affairs will not be tolerated, and that our armed forces will defeat them. Today marks a new chapter in the defence of our nation".

NATO spokespersons denied that any aircraft taking part in the operation over the Republic of Krajnika had been lost, with one stating "All of our aircraft and pilots have been accounted for. This appears to be more propaganda on the part of the Krajniks".

NATO's Operation Overwatch has been ongoing over Krajnika since June, after evidence surfaced that government soldiers were taking part in "ethnic cleansing" operations against civilians of the Doldovan minority during the country's civil war. The operation consists of patrolling a no-fly zone, as well as bombing air defences and military forces engaging in actions against civilians.

Stay tuned for event details on the Ottawa Milsim Coalition's next event, "Eagle Down", to be announced soon here on Grey Ops! And if you believe this is a real news report, click here.
Email Post
Labels: Carnage Paintball Event Milsim Ottawa Paintball