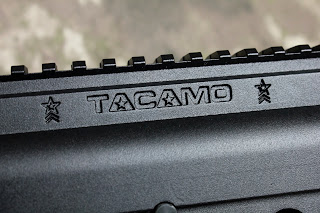 It's impossible to ever be (completely) objective, you can go ahead and argue that with me, but I've already made up my mind about it and there's nothing you can do about it. That being said, there are certain things that always seem to evoke especially prejudiced or agenda laden opinions one way or another. The Tacamo conversion kit reviews I've seen thus far seem to be perfect poster children of such objects of subjectivity (that sentence makes my brain hurt). So, with that being kept in mind, here is my review of the Tacamo MK7P conversion kit (all other Tacamo kit reviews will be short addenda, as it's just not efficient to do entirely new reviews of each one, barring extreme unforeseen circumstances), with the goal of reviewing the conversion kit for what it is and does, not for what it represents and evokes feelings of from any party. That enough of a preface for you?

Well too bad because I'm not done. A humongous thanks goes out to Chris at Tactical-Mod for hooking me up with this conversion kit. I didn't think I was going to get a chance to review the MK7P, but he was willing to lend me a copy he had set aside for himself to review and have some fun with. He even went as far as to provide me with a sweet UBR stock, Magpul AFG, Apex 2 and 416 style handguard (see the Tactical-Mod store for these products). I'll include an addendum on those products at the end of this review (yeah, it's going to be a lengthy post, sit tight).

Yes, it's sexy. No, I didn't have the front push pins in for this pic. Bite me.
Product: Tacamo MK7P Conversion Kit for the Tippmann X7 Phenom
Price: Depending on when you ordered it, the kit goes from anywhere between $60 USD and $120 USD.
Options: None specifically thus far, but look forward to an air-through system as well as new accessories in the future I'm sure. Plus, it accepts basically everything an X7 Phenom would.
Specs: 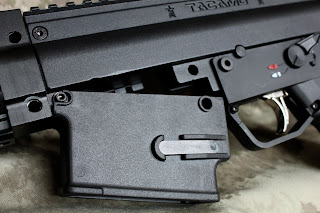 Note: I don't particularly like nutnfancy (don't worry, I'm going somewhere with this), but what I do like about his knife reviews (which I find fairly useful as a knife collector, as opposed to his other stuff which makes me kind of embarrassed to be watching his videos) is that he keeps on coming back to the term "Philosophy Of Use". "POU" refers to each product available to you having a discrete purpose and niche.
So when I talked about eliminating bias at the beginning of this article, one of the big aspects of that is reviewing this conversion kit for exactly what it is. It is a conversion kit for an existing marker at an affordable price point (especially for those that bought at $60), meaning it's not a marker in and of itself. So this is a review of: how well the MK7P implements the features it brings to the table, the specifics of those features, the general build quality, the ease of use, etc. If you're looking for a review of a whole marker, this isn't one, because that's not what the Tacamo conversion kits bring to the table. They take an established platform (Tippmann marker) with all its faults and perks and add to it without changing those attributes, so the pluses or shortcoming of the underlying marker won't be touched on.
Pros: The MK7P does so many things right. It fits easily on the marker, I haven't noticed any glaring construction issues in my copy, and it does the job it was meant to do. Without having any technical know how or paintball experience, any player picking up an X7 Phenom for the first time could almost undoubtedly put this kit on and begin playing with it. The magwell can be removed without any tools, and easily replaced with a cyclone (although why you would want to do that is beyond me, this whole hopper fed business in paintball has me completely perplexed). The kit in no way interfered with the workings of the Phenom. As far as compatibiltiy goes, the kit worked fine with T68 and Milsig mags, and I actually prefer the Milsig mags' snug fit (needs a tap upon insertion) to the marginally wobbly T68 fit. The Phenom allows for the kit to have a comfortably reachable magazine release (where the other models won't, because they'll have an ASA connection in the way) with a good positive retention on all mags tested upon insertion. 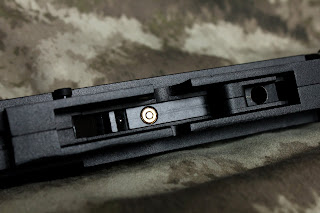 Issues that I had with my evaluation copy of my MK5 kit that have been rectified include: the mag well construction (the latch does not move on a pivot anymore), it accepts mags far more easily, and feeds with better consistency/smoothness. I say better not perfect because I do think there's a little room for improvement when compared to say the Milsig magwell/mag feeding consistency/smoothness. Just pretend I put that in the "Cons" section.
Cons: While I haven't had any build quality problems with the kit supplied to me, there have been several very vocal reviews for this kit outlining some serious quality control issues for this first batch of Tacamo conversion kits. While there's no way to quantitatively gauge the scope of these issues, it would qualitatively appear that RAP4 has had some localized significant (but not crippling by any means) issues with quality control. But, their response to it thus far (from what I've seen and heard) has been accommodating and understanding, with them promising in a recently released video to slow down production to do a thorough QC check of all future released kits. 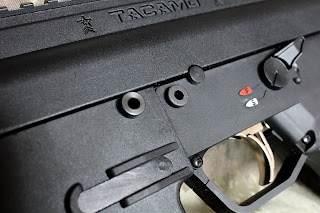 A couple of minor issues I had with the kits themselves included: a bit of overspray on the receiver interior, and a lack of reading material for those that like to have a mini novela with their product (I'm not one of them, but I do know that people like shiny pamphlets with ad copy out the ying yang).

Now on to my large problem that is rather inconsequential to the kits themselves, but I think devastating from a marketing/design perspective on RAP4's part. The length and aesthetic of the magazine packaged with the kit makes me feel like this:

It's a gangly, repulsive turd that ruins the aesthetic of the entire kit, which I think RAP4 otherwise did a very nice job on. I think it would actually be much better for the image of the kits and the TACAMO brand for older 18 round style magazines to be package with any future releases, as opposed to these 20 round monstrosities.

Overall: While it may look like my "Pro" section is somewhat smaller than my "Con" section, that truly isn't the case, and it only appears that way because so many aspects of the kit are well executed. RAP4 has brought a revolutionary and overall excellent (in my opinion) product to the market that delivers almost exactly what was promised. If they go on to finish their First Strike magazines, fix their mild QC issues and send their 20 round magazines screaming back to hell, they'll transform this powerhouse of an add-on into a practical must-buy accessory for any Tippmann marker. Bravo RAP4.

As for you Tippmann, you really screwed the pooch on this one. I hope your next Multi-Tool shoots laser guided rockets, because your failing to do this for your own markers must mean you have something truly ridiculously awesome you've been devoting all your time to. Right? 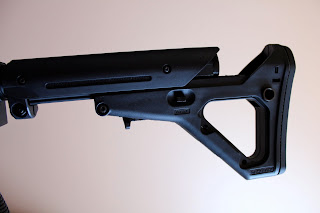 UBR stock: What an amazing stock. I don't know why the paintball world is taking so long to catch up to the airsoft idea of using branded stocks that are ready to fit on your marker, but the inclusion of a plug and play X7 UBR stock is a great step forward. $140 is a bit steep for my tastes normally, but I'm sure there are people out there (whether I'm one of them is question I'll leave for myself for when I'm not broke) willing to pay that and more for a specialty item like this, especially given it's a Magpul branded accessory. 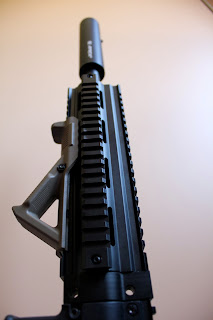 416 Barrel Kit with Apex 2: While I haven't had a chance to fool around with the Apex 2 that much (I'm not a huge fan of imparting spin on the ball, I find you lose precision for trick shots, which you can't really afford with a mag fed marker), the 416 shroud is beautiful. The finish for the most part matches the MK7P really well, and provides so much rail space that I'm at a lack for accessories to put on it. One thing I think would truly make future iterations that much better would be finding a means of making the rail continuous from the receiver all the way to the end of the handguard. It's not a big deal I suppose, but I think the aesthetic is only truly completed if you have an unbroken rail across the entire top of the marker.

Once again, thanks Chris for lending me the MK7P for review! And I uh... lost it so you won't be getting  it back. So don't go crying about it, and ignore any future pictures of me with the kit. It's just an illusion.
Email Post
Labels: Accessories Milsim Paintball RAP4 Review Tacamo Tactical-Mod Tippmann