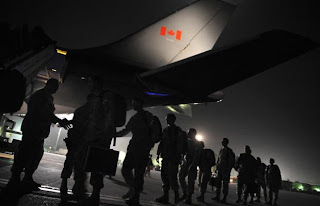 CANADIAN PRESS - Anonymous sources at Camp Vigilance in Greece have confirmed that Canadian ground combat troops landed at the base this morning, and may be taking part in an operation in the nearby Republic of Krajnika.

Sources stated that a platoon of special operations soldiers touched down at the base in a Canadian Forces jet at dawn. At this time their mission is not known, but it is believed that their arrival is related to the crash of a CF-18 aircraft on Monday afternoon. Canadian Forces spokesman Major General Dave Hogan confirmed that the aircraft, taking part in NATO's Operation Overwatch in Krajnika, had gone down. But he denied that the plane had been shot down by Krajnik air defences, as was reported by Krajnik State Television.

More to come as this story develops.

For full details on the Ottawa Milsim Coalition's next event on Wednesday August 24th, "Eagle Down", refer to this post.

It's come to my attention that the directions on the Kijiji.ca listing for the event are wrong, so here are the proper directions to Carnage Paintball:

From Highway 417, take exit 79 for Limoges (the one for the Calypso water park) and head South. After about 2 minutes of driving, you'll come to an intersection with a gas station on your left. Turn left here, drive for another minute, and you'll see Carnage Paintball on your left.

The safety and rules briefing kicks off at 6pm sharp! Please be on time, since we'll be playing with limited daylight left. To fully enjoy the game, be sure to bring some sort of anti-fog for your goggles (humidity will be pretty high), and insect repellent is a must this time of year!

Action Gear Canada, Crypsis.ca, and Carnage Paintball have graciously donated prizes for this event, so 15+ people will be going home with something new for their gear bags!
Email Post
Labels: Carnage Paintball Event Milsim Ottawa Paintball