News From The Front: "The Sword", Milsim Night at Carnage Paintball 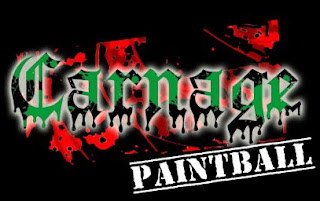 July 27th saw the Ottawa Milsim Coalition's first Milsim event, "The Sword", hosted at Carnage Paintball in Embrun, Ontario. Despite a relatively late announcement and promotion of the event, and an expectation of a low turnout of less than 20 attendees, a whopping 38 players turned out to take part in an exciting night of Milsim Paintball that evening! For those who couldn't make it, rest assured that there will be more events like it in the very near future for you to enjoy. In the meantime, here's a report on what took place that night. (Note that as I was too busy running around with the high turnout, I wasn't able to take any photos at the event).

The safety and rules briefing kicked off shortly after 6pm. The rules were similar to regular woodsball, with a few twists; the main format was limited ammo, with a limit of one hopper plus one pod per mission. Players would have to drop to the ground when shot, and lie down for at least 10 seconds before getting up and walking off. Gun hits didn’t count as an elimination, but the marker couldn’t be used again until it was physically touched by a designated “armourer” on the team, or you touched the marker of a “dead” player on the ground (to simulate picking up his weapon). Referees in the event would be wearing light blue caps as “UN observers”, with their word being final. Last but definitely not least, the rule was stated that Speedball guns or gear of any kind were not permitted, as it was a Milsim event.

Connor (of Grey Ops) and I held a quick presentation on basic tactics for anyone who wanted to see it. These tactics were designed to be used in the scenarios to follow (bounding, suppression, how to run a 2-man scout team), but a secondary purpose of this session was to delay the start so that latecomers would still have time to get there in time for the actual game kickoff at 7pm. However it seems that most people were there for the 6pm start anyway, so this wasn't necessary. To make for more playing time before dark, if we hold these sessions again it'll probably be at 5:30pm, pre-event.

With the tactics session wrapped up, it was on to the scenario at hand. Players were split up into two teams, with the SRJ team numbering 14 members, and the JSOF team having 24. As the SRJ would be the defending team throughout the night, and defenders have the advantage in attack-and-defend games, we felt this would be a good split. The 8 members of Danger Close present volunteered to play the SRJ, with the remaining 6 made up of attendees not affiliated with a team (including Connor). The SRJ team was sent to a spot near the entrance to the playing area, while the JSOF team stuck around the staging area for their briefing.

“Mr. Black” and “Mr. White”, members of “an agency not officially in Draghistan”, briefed JSOF. The JSOF’s objectives were simple: The commander needed to send a scout team to watch the SRJ base (an abandoned chemical depot), assess the number of enemy fighters present and their positions, and examine the terrain features around the depot to determine a proper avenue of attack. The second phase would be carrying out the assault, and securing a dirty bomb believed to be held by the SRJ in the depot. 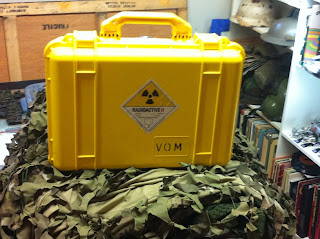 Next, “The Cleric” approached the SRJ team and briefed them on their mission to defend the depot and protect “The Sword” (the dirty bomb). Wrapped in a robe, with a shemagh covering his face, The Cleric passionately explained how the fate of their cause depended on the device, and that they should give their lives to protect it if need be. A truck would be arriving in 2 hours to transport the device to a freighter, so that it could be smuggled into North America.

With the briefings done, the scenario kicked off, with respawns (“reinforcements”) scheduled for every 10 minutes. The SRJ players moved out to occupy the chemical depot (a field set up full of empty plastic barrels), while the JSOF team moved into a bunker village at the opposite corner of the field. Unfortunately before the JSOF team commander could get everyone together and organized, groups of players started to walk off into the dense woods in small groups to look for a fight, and only a few groups were able to be corralled back. This meant that instead of the numerical advantage that a cohesive team would have, it came down to groups of 3-4 players emerging from the woods and taking potshots at the defenders. This of course led nowhere, and a desperate push by a small contingent during the last 5 minutes of the mission still wasn’t enough to overtake the depot and get to the bomb.

After a short break to refill on air and paint, JSOF members were briefed on their next mission. Following the battle, a UAV had spotted the SRJ insurgents moving the package to a hardened bunker in a nearby valley, and an assault on the bunker to recover the bomb would take place. There were three ways to complete the objective. First, the attackers could eliminate all 9 defenders with paintball hits. A second option would be to run right up to the bunker and throw a grenade into the window, with the overpressure killing everyone inside. The third way was to close to a suitable firing position (there were 3 potential spots, marked with caution tape) from which to fire one of two LAW rockets at the concrete bunker.

The attack kicked off at dusk, with the SRJ members putting up a fierce defence from the 2-story bunker. JSOF members hit back with heavy fire into the open windows of the bunker, forcing the insurgents to keep their heads down as much as possible. After about 20 minutes of firing and flanking, a JSOF soldier managed to make it to the bunker, but had no grenade. A team member promptly tossed him a grenade, which he dropped into an open window on the first floor. Almost simultaneously, another JSOF member fired a LAW from one of the 3 positions. The bunker was TOAST, and the good guys won in the end!

Players made their way back to the staging area, where prizes were awarded. Between patches, gear bags, and other items, 10 players won Paintball gear in the draw, and Chuck from Carnage graciously donated a 1-year membership to his field to the prize pool. 2 lucky people got a set of 5 free passes to the field as well (meaning free equipment rentals). All told about a third of the 38 attendees went home with something new for their gear bags!

The Sword was a first run for the Ottawa Milsim Coalition, and there were some lessons learned that will help us improve future events.

The first issue was with play time. Between the rules and safety briefing, the tactics session, the briefings for each team, and the break between the games, the actual time on the field was about 65 minutes for the first mission, and 20 minutes for the second. With only 3 hours of event time, we’ll have to find ways to maximize game time and keep things flowing quickly. As the months go on the amount of daylight we’ll have for an evening game will be lessened, so this will become crucial in later months (an earlier start time may be needed as well). For the next event we’ll be shifting the tactics session to 5:30pm, pre-game, and we’ll see how that goes (most participants were at the field by 5:30 anyway). If we can get great turnouts like we did at several consecutive games, we should be able to set up a larger, full-day event at a field in the Ottawa area.

Most players complied well with the rules, and played along with the Milsim scenario. However, I heard a few complaints that there wasn’t enough shooting in the first mission, but this was out of the organizers’ control. Had the JSOF team stuck together instead of scattering into the woods, a coordinated attack on the depot would’ve been EPIC, with loads of suppressing fire flying on both sides. As it was, with 14 defenders gunning down groups of 3-4 players coming out of the woods at a time, it was a slaughter, and firefights were very short.

It didn’t help either that we neglected team balancing. Because it’s cool to be bad, a lot of experienced players volunteered to play on the insurgent side, which left many new and inexperienced players on the JSOF team. A shifting around of players for the second mission evened things out nicely, but for future events we’ll be more careful about balance.

Players seemed to enjoy the scenario briefings, as if they were REAL operators being briefed by CSIS agents in the field, or insurgents being motivated by their extremist leader. This is definitely a feature we’ll keep for future events.

Being the first OMC event, we realized that there would be hiccups, but we learn fast! We’re already hard at work on the next OMC event, “Eagle Down”. The date and time for this event will be announced shortly, but in the meantime here are some photos of a prop GREEN_MACHINE has been working on for the scenario (a surface-to-air missile installation): 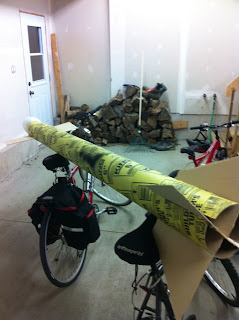 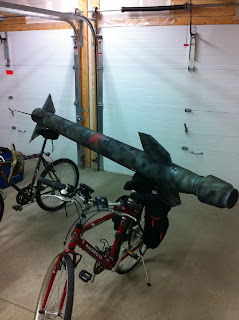 In closing, I just want to thank GREEN_MACHINE and everyone else who helped make The Sword an overall success. I also want to extend a big thanks to the players who attended and supported this event, because it’s YOUR support that will grow the Milsim Paintball community in Ottawa! If you keep coming out, we’ll keep organizing fun Milsim events for you to enjoy. Deal?

Lastly, I want to thank Chuck at Carnage Paintball for being an excellent host and helping us out with more prizes to give away. I found out Chuck and his crew actually set up a brand new deadbox to accomodate this event, and hurried to finish construction on a tower for us as well. He has a machinist working on a couple M2 Browning machineguns with Proto Rail internals, which will be sure to sweeten future Milsim scenarios when they’re ready.

Stay tuned to Grey Ops for the announcement on the next Ottawa Milsim Coalition event, “Eagle Down”!
Email Post
Labels: Carnage Paintball Event Milsim News From The Front Ottawa Paintball