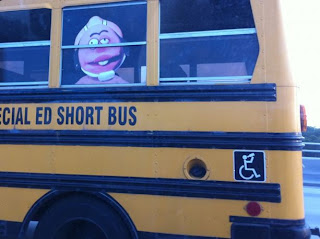 The Grey Ops Short Bus will be an occasional feature on Grey Ops that showcases the truly retarded in the world of Milsim Paintball, wherever they may be. We're talking people so retarded that they not only ride the short bus, they also wear a hockey helmet and sit up real close to the front so that the driver can keep an eye on them for liability reasons.

A couple of days ago I posted a mock news story as a teaser for the Ottawa Milsim Coalition's upcoming scenario event, "Eagle Down", which will be loosely-based on the wars in the Balkan states in the 1990s, and the NATO involvement in them. The fake article talked about a new photo-reconnaissance package being installed on Canadian fighter jets enforcing a no-fly zone in the Republic of Krajnika. Apparently some people didn't quite get that it wasn't real, and discussed it on a popular Milsim Paintball message board, with participants adding some...embellishments.

Now we've seen something like this before, and I won't post the link to the actual thread (so as to save the participants some real embarassment), but let's just say it wasn't pretty.

As soon as the article was posted to the board, one poster replied that it was "Beautiful" that the Canadian Forces were "getting some new toys".

Another poster, said this was "awesome", and another reason why he'd rather go "RCAF" if he went "back to the forces". He also added as a side note that "Maj. Gen. Hogan was much cooler as a Col." (Colonel), as if he knew him way back when. I'm not sure when or if this poster has ever been in the Forces, but the RCAF (Royal Canadian Air Force) hasn't existed since 1968, when the Liberal government of Pierre Trudeau combined the land, sea, and air arms of the military into "The Canadian Forces". Also, "Major General Dave Hogan" is a fictional character, made up of the first and last names of two of my personal friends. But I have to agree, they are pretty cool guys.

Yet another poster points out that "It's about freakin time!" that the FEARS packages were installed, and that he was "wondering when they were going to implement the dang technology". He added that "It was on shelves for quite a few years. Could have used it back when we were in Afghanistan at the start of the crack down of the Taliban. Oh well". Considering that FEARS, the "Full-Enhancement Aerial Reconnaissance System", is a creation of my own mind with a cool acronym that I pulled out of my own ass for the "Eagle Down" scenario, I'm wondering how it could have been sitting on any shelf, and how the hell this secret squirrel poster had knowledge of it all this time. But I agree, with its science fiction-like capabilities (reading the fine print of a postage stamp on the ground while flying past at the speed of sound, come on!), FEARS would've been perfect for spying on the enemy and smokin' them Taliban outta their caves.

The real kicker is that the end of the mock article talks about a NATO operation over the Republic of Krajnika, where Canadian fighter jets are part of an effort enforcing a no-fly zone after Krajnik soldiers committed atrocities against Doldovan civilians in their civil war. There has never ever in the history of Planet Earth been a Republic of Krajnika, any place called Doldova, or any civil war there. Nor are any Canadian military planes flying over any European country enforcing any no-fly zones at the moment. It's pretty astounding that no one on that thread realized this, and has no idea where their military forces are actually engaged and killing people in their name at this time.

I thought making the title of my fake news article "Attention Ottawa-Area Milsim Paintball Players: News Report" would get the message across that this was part of a Paintball scenario, but just in case I added at the end of the article "Stay tuned for event details on the Ottawa Milsim Coalition's next event, "Eagle Down", to be announced soon here on Grey Ops!" Apparently it didn't work! The next "news article" setting up the scenario talks about a CF-18 getting shot down over Krajnika, so I wanted to point out before it gets posted that this setup is FAKE, to head off anyone freaking out and calling their member of parliament or e-mailing the CBC for more info on us Canadians "losing a bird".

Moral of the story: Don't believe everything you read on the Internet, DEFINITELY don't believe anything anyone says on an Internet discussion board (a LOT of these "Chairborne Elite", to coin a term a good friend of mine came up with, are know-it-all FRAUDS), and get edumacated on politics, the military, history, and current events. These things are important, boys and girls!

Now anyone in Ottawa reading this, if you'd like to come out to the Ottawa Milsim Coalition's next scenario, "Eagle Down", stay tuned to Grey Ops for info coming soon! One of the missions will be to make it to a CF-18 crash site before the other side, and retrieve the FEARS module...which incidentally, will be a computer power supply with black duct tape on it, and "F.E.A.R.S. MODULE" written on it in black marker. In fact, it fits quite nicely on a shelf. 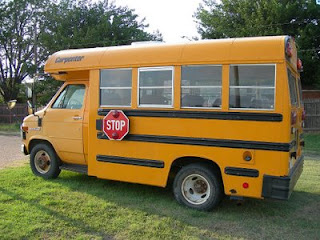 No retards were harmed during the making of this post. We here at Grey Ops understand that the word "retard" is very politically incorrect, and apologize in advance to any slow people who may be offended.
Email Post
Labels: Milsim Ottawa Paintball Scenario Short Bus