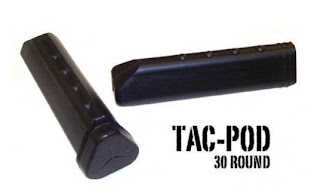 Last season I spent WAY too much money on paint. I found that the more I had in my hopper, the more I tended to shoot - and I think most people are the same way. This psychological effect works out great for field owners, but not so great for your wallet.

With the mag-fed trend and Tac-Caps catching on, and people going into games with only 18 to 30 rounds in their markers (and still kicking ass), I thought I'd give limited ammo paintballing a try this season. At the very least it'll save me gazillions on paint, and at best it'll force me to make the shots I take count.

With a 30-round Tac-Cap installed on my hopper, I set out to find a pod that was suited to the job of refilling it. The conventional 100-round pods I normally use would leave a lot of paintballs jostling around after each fill, and nothing gives your position away more than that lottery-wheel sound of running around with a half-empty hopper or pod. For a while I toyed with the idea of stuffing the bottoms of my pods with garbage bags to fill up 70 rounds worth of space. But then I realized I'm gainfully employed, and I decided to look around and actually drop some cash on something purposefully designed for the job.

I picked up 6 of these recently to start rocking the limited-ammo lifestyle. Here's my take on them out of the box.

First off, the manufacturer's ad copy for these pods states that 3 of them fit perfectly in an M16 ammo pouch. I beg to differ, because as you can see from the photos below, 2 of them fit nice and cozy in my pouches designed to fit Milsig mags (which are somewhat bigger than M16 magazines). This still isn't a problem though, because a standard vest with 4 M16 double mag pouches would still allow you to carry 240 extra rounds. This is plenty for any scenario baller, unless you're the last poor bastard on your team at a big game, and you're defending the bomb/drugs/flag to the death. 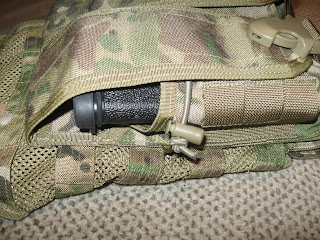 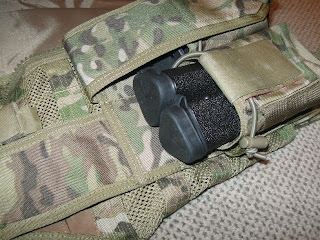 These babies are durable, just as every paintball pod should be. They're made of solid plastic, with a rubber lid that's easy to pop off with the flick of a thumb. One feature I like about them is the textured surface, with a line of plastic nubs on one side for better grip. The pod even looks somewhat like a weapon magazine if you glance at it real quick. 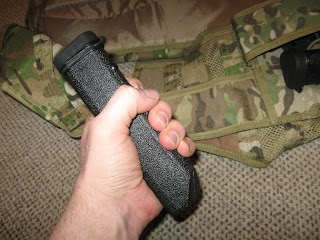 Now as much as I hate to say it, it's NOT all good with these pods. They suffer from a HUGE problem, in that there's a nice sharp plastic edge at the very top of the pod, on all sides near the lid. 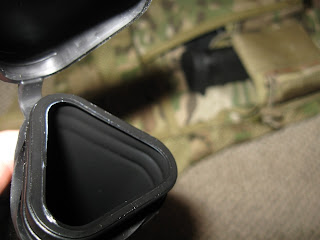 This feature is also on another Allen product, their standard flip-lid pods, which I hate with a passion (although some people like them - Connor did a recent review of this product on Grey Ops, which you should check out). Personally, I can't see how any product designer with even minimal paintballing experience would consider this feature a good idea. There's nothing worse you can do to a paintball pod than to add a nice edged ridge near the exit for your paintballs to roll over on their way out. Your balls already go through hell in an average paintball game (this is not a reference to a nut shot, although those do suck), and on top of the heat and humidity and impact in the pod from normal summer play, they don't need to be abused on their way out to your hopper. 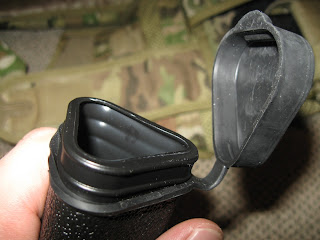 I tested out the pod using reballs, to see what the ridge was all about. (I would've used real paintballs, but the girlfriend gets mad when paint gets into the carpet, so reballs would have to do). And here my friends, are the results...or should I say "Fallout", from having that annoying plastic edge: 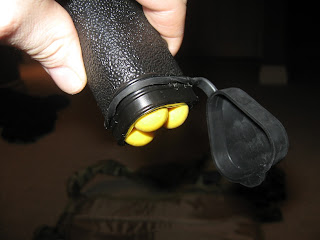 As sold, you need to constantly shake the pod to have the paintballs drop out. Not just once to get them going, but constantly. Because of this, you'll have to take an Exacto knife or other sharp implement to file down at least one of the edges for them to flow out the way they should (and to keep my paint from getting slashed up, I plan to file down ALL of them). So if you buy these, as cool as they look, realize that you will have some arts & crafts work in your future if you want to get them working as intended.