This is the second post on GreyOps.net in a series on CQB tactics for paintball. For the rationale behind this series, see Part 1.

Before we continue, let's define Close-Quarters Battle (CQB). There are a lot of fancy definitions out there that try to sound all technical and snooty, but the basic definition of CQB is "Fighting really f**kin' close!" This isn't taking a shot at a guy from 300 yards away. It's not dropping a 1000lb bomb on some poor guy's head from a fighter-bomber at 5000 feet. This is like in Roman times, when you'd get close enough to your enemy to see the fear in his eyes before you gouged them out with your spear. It's coming around a corner and seeing your enemy right in front of you. It's you shooting at him and him shooting at you, until one of you goes down. It's intense. But for those of you who absolutely MUST have some technical definition, you could say it's "Engaging enemies at close-quarters and neutralizing them with effective fire, while using proper tactics to minimize losses". A general characteristic of CQB is that it consists of "Short-duration, high-intensity battles".

One could argue that with the limited ranges of paintball markers, and the confines of the average paintball field, by definition ALL paintball engagements are close-quarter battles. With this in mind, most of the tactics for real-life CQB carry over pretty well. We'll get into some of those tactics later in the series, but first let's talk about how people react in high-stress situations like CQB.

Under extreme stress, such as in CQB situations, people go through certain physiological changes caused by an adrenaline spike. One possible manifestation of this is freezing. This is good in certain situations, but bad when a proper quick reaction is needed. Another is the Fight or Flight response, meaning aggressively charging towards a threat or turning your back on it and running away (both of which are usually bad moves in CQB). Others may experience speech problems, like stuttering or having their voice rise in pitch. A very common reaction is "clinging to the herd", in other words staying close to the group. This is a normal instinct in most social animals, as you improve your chances of survival by being in numbers (you don't need to be the fastest zebra in the herd to escape the lion, you just have to be faster than the slowest zebra). 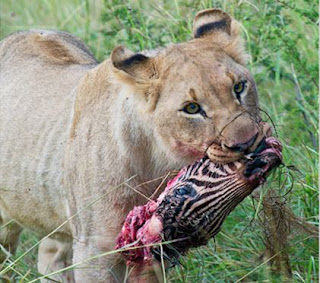 This reaction can hurt your chances for survival in CQB, since you may be in a situation where you need to maintain space between you and your teammates. OR you might realize you're really in a bad spot (like this poor bastard getting shot up below), but you stick with them anyway because you want to stay with the group. 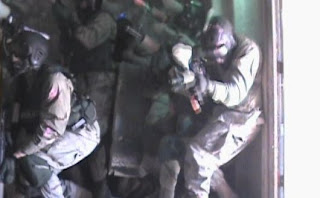 Let's go on a tangent for a moment and take a quick look at the process from perception to action:

Person 1 perceives something, evaluates it using their brain's current state of knowledge for guidance, and then acts. (I included the "Person 2" line to illustrate why action is always faster than reaction. Before Person 2 can (re)act, they have to first perceive the initial action, then evaluate it, then take action of their own. Person 2 is already 2 steps behind). This cognitive delay is bad enough when you need to act quickly, but when stress reactions take over your brain during the Evaluation phase, it gets even worse.

So we've identified why these stress responses are a bad thing in a life-or-death situation, but in paintball because your life isn't on the line you may only see "light" manifestations of these reactions. We've all heard a kid's voice break while yelling something when he gets excited on the field, or seen a buddy freeze when incoming paintballs start hitting all around him and his brain jams up as he tries to decide what to do (DUCK!). A little stress is good, because it keeps you alert and keeps your reflexes sharp. But too much stress causes the aforementioned reactions, clouds your thinking, and complicates the evaluation phase, slowing your reaction time. So how do we reduce our stress and keep it manageable in an intense situation?

One method of short-term stress reduction is COMBAT BREATHING. This is a term coined to describe slow, deliberate breathing in an effort to slow your heart rate and lower your general level of tension. It consists of taking a medium-deep breath for 4 seconds, holding it momentarily, then breathing out for 4 seconds. Under stress you may not get the timing right, but the important thing is to remember to BREATHE! Your brain needs oxygen to function properly, and under stress a lot of your oxygen gets shunted to your muscles for quick action, which leaves less for the brain. By making sure you don't take shallow breaths (or worse, hold your breath) in a combat situation, you keep an adequate oxygen supply going to your brain, and the rhythm of combat breathing brings your body's stress level down considerably.

Another method of bringing your stress levels down (and this is ESSENTIAL), is proper TEAMWORK and COMMUNICATION. When you have too much responsibility in a stressful situation, the stress tends to pile up even more. Stress is a result of a perception of a LOSS or LACK OF CONTROL over your environment/situation. So when you have a division of labour in the team, you have less to worry about losing control over. To illustrate, imagine a situation where you're going into a hostile environment alone, and have to worry about threats from all sides - meaning 360 degrees of risks to your life. Now imagine a situation where you're a team of 4 going into that same situation, and each of you has only a 90-degree sector to cover. You only have to worry about that one sector, and you have confidence that your teammates will cover their sectors as well. That takes quite a load off, and your stress levels would be a lot lower. The communication part comes from reassurance from your teammates, and from members of the team keeping each other cool and in control. Hearing things like "Watch that door on the left", "Stay sharp", and "Watch your breathing" from your various teammates lets you know you're among alert, capable company. And of course, the importance of a good team leader who can handle stress well and keep his team focused can't be overstated.

I just want to address one more thing when it comes to stress and CQB, and that's the issue of "blue-on-blue" fire. If you're into Milsim paintball, then it's likely your team doesn't wear bright red or yellow jerseys to set you apart. In fact, you're probably wearing some form of camo or black (which the opposite team is also wearing), it may be dark if you’re indoors, and the only way to tell friend from foe is a small band of blue or red tape on your upper arm or paintball gun. Subject to the stress of CQB, with your "evaluation" abilities being at less than their best, it's very easy for you to shoot a teammate by mistake. Since even a hit from your own team can eliminate you, you need to stay organized, realize where everyone from your team is at all times, and maintain strict fire discipline. Spray 'n' pray is out, checking your target and picking your shots is in. When you hear someone from your team yell "Cease fire!", stop shooting immediately. Or if you hear "Check your fire!" you need to really be careful with your shots, and avoid firing full auto (this is what someone should call out when they feel they're getting dangerously close to a teammate's field of fire).

And one thing you should avoid at all costs, even in low-stress situations, is "muzzling" or "lazing" your teammates. Never point your marker at something you don't intend to shoot, and this includes the back of your teammate's head! Under stress, or when surprised, or when the shots start flying about, you may just unwittingly fire a shot off, and if your marker's pointed at a teammate at that time, then that's the end of the game for them. So make it a habit at all times to avoid pointing your marker's business end at friendlies. If someone crosses in front of you, or if you cross behind them, quickly point your marker down at the ground/floor. In fact, if you watch Airsoft or paintball Milsim teams on YouTube, this is the main giveaway that you're watching amateurs. As realistic as their gear and loadout may look, when you see one or more members of the team sweep friendlies, pointing their weapons at their buddies ahead down the hall, or off to the side of a room, you know you're watching civvies. Someone in a REAL fighting force would never get away with that, because they would catch PURE HELL from their teammates and instructors!