These days in the Milsim world, be it at paintball fields, on YouTube, or on Internet discussion forums, there's far too much focus on fancy gear and looking the part, but not nearly enough emphasis on how to play with proper tactics. What ends up happening with this focus is that most Milsim players resemble SpecOps operators on the field, but display tactics more like the Somali mob in Blackhawk Down.

If you think this doesn't apply to you, well…it probably does. And it's nothing to be ashamed of, because there's no official Milsim paintball "training program" that everyone goes through when they start playing. The vast majority of players in this game have day jobs as plumbers, students, office workers, etc, and with no tactical guidance they just emulate the behaviour of action stars they see portrayed on TV and in movies. This is a bad idea, because the way combat is portrayed in entertainment is overwhelmingly NOT the way to do it in real life. Jack Bauer gets away with the mistakes he makes because the script says he does, not because they're sound tactics. Mind you, occasionally you'll see a good example in the media, but most of the time what's shown in fantasy-land is enough to make you cringe if you have an idea of proper tactics. 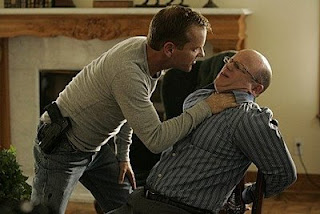 "You DARE question my tactics?!?"
As someone who's had real-world training in this area, I decided to put together a series of Grey Ops articles on proper tactics for Close-Quarters Battle (CQB) in paintball. A lot of real-world CQB tactics cross over well to paintball, with certain exceptions due to 2 factors: 1) Paintballs fly slower than real bullets (which reduces their accuracy and leads to an arcing flight path/drop), and 2) Paintballs don't penetrate most materials (thankfully, including the human body). There will definitely be something of value in this series for a player at any level of experience who hasn't had police or military tactical training.

Part 2 of this series will focus on the definition of CQB, the psychology of CQB situations, and how to manage stress and persevere during Close-Quarters Battle. Part 3 will highlight some basic individual tactics, and communicating with your teammates. Part 4 will discuss how to safely negotiate corners, which is a science in itself. Part 5 will cover Fighting In Built-Up Areas (FIBUA), and applies to anywhere from playing fields with village structures at your local field, to a large abandoned warehouse complex you might play at during an outlaw game. Part 6 will cover the most hazardous aspect of CQB, that being Dynamic Entry (room-clearing). Part 7 will use real-world video demonstrations by real fighting forces to show proper Dynamic Entry tactics.