Skip to main content
Labels
Posted by Connor May 17, 2010 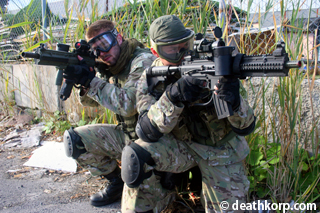 Deathkorp, a milsim team.
To kick off Scenario Week, let's clear the air about the difference between scenario paintball and milsim paintball. "Eh? What's that?!". Yes, you heard that right, there is a difference. Despite what many non milsim/scenario players and even some notable online personalities say, milsim paintball and scenario are two different entities, but not mutually exclusive.

To get to the root of the difference, let's break down the words (in my own definitions).

Milsim: Short for military simulation. Quite simply, the replication of military weapons/apparel/tactics/communication etc. for recreational or training purposes.
Example: Teams dressing up in camouflage, tactical vests etc. with markers that replicate the look and feel of real firearms, participating in a force on force engagement with military tactics.

Scenario: A setting, formulated sequence of events or plot driven activity in a historical, fictional or suppositional context.
Example: Teams, utilizing whatever play style they wish, participating in a recreation of The Battle of the Alamo.

Example of a case where both apply: A scenario game played in a milsim fashion (The Battle of Mogadishu with milsim equipment requirements), or milsim players/teams participating in a scenario (a milsim team attending Fulda Gap). 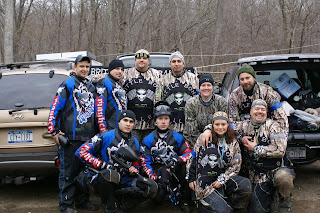 Brittle Boned Ballers, a scenario team.
More often, you will see milsim players playing in a scenario, as the style of play lends itself well to having scripted games. However, most scenario games will see a motley mix of speedballs, woodsballers and milsim players. It's not a huge issue that people often confuse the two, but a part of me is annoyed when someone in the community will proselytize "milsim" or "scenario" paintball without really knowing what they are talking about. Semantic rant over.
Email Post
Labels: Milsim Paintball Scenario Scenario Week