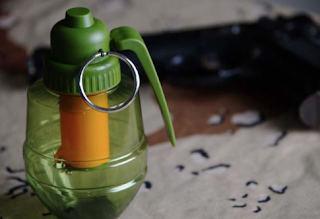 A lot of airsoft hand grenades scare me. The idea of a plastic container rupturing/exploding so as to create a loud bang (and occasionally a BB shower) doesn't sit well with me, as all I imagine is an errant piece of plastic flying through the air at who know's what velocity. CidaSoft offers an interesting alternative to the aforementioned grenades, using the tried and tested technology shown below:


Science Alert
Okay so it's not exactly the same reaction as show above, but for all intents and purposes it is the same. Baking soda is still used, but instead of vinegar (dilute acetic acid), the grenades CidaSoft makes are designed to be used with citric acid. The reason for this is that citric acid is a stronger (pKa of 3.128 @ SATP) acid than acetic acid (pKa of 4.756 @ SATP) and is easily purchased in concentrated form anywhere in the world (as opposed to acetic acid which is only readily available in dilute form a.k.a. vinegar).  The gist of it is that the interaction of baking soda and an acid in solution (a bit of water added to the two powders) forms carbon dioxide gas which raises the interior pressure of the grenade, eventually causing the thin plastic vessel to rupture. The remaining species are leftover baking soda or vinegar, water and a harmless salt.

Here's an equation for you:


If you really wanted to, you could replicate this (with varying degrees of safety) at "home":

Here's your disclaimer: Don't be an idiot.
And here's what CidaSoft's explosions look like (the creator's done a nice job of showing off his project on Youtube):


The shell itself looks almost like that of a plastic water bottle, even having similar threading (I wouldn't be surprised if you could use a water bottle with it). That gives me piece of mind, as most water bottles are thin and non-brittle, leaving less risk of injury.

And if you're like me and have wondered how safe that little explosion is:


I'd like to mention that at this point CidaSoft's flashbangs are not biodegradable, but the owner says he's working on that. That sits fine with me, as I can't imagine ever using these outside of an indoor CQB environment. Anyone have any experience with these little doohickies?