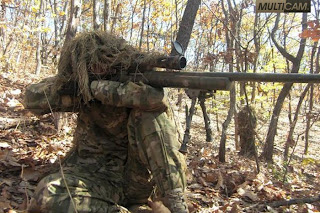 MultiCam has become a very popular camouflage pattern among Milsim paintball players in recent years, and is sure to become even more popular with the exposure it'll get when US Army soldiers are seen wearing it regularly on the evening news:

Now, MultiCam isn't the prettiest pattern to look at up close. I've personally nicknamed it "Vomitcam" myself, and some have compared it to "wearing dirt", but there's no denying its versatility for Woodsball. The problem with some modern camouflage patterns like CADPAT is that they rely heavily on dark green for blending into deep woods. But paintball fields, which have usually been cleared of a lot of vegetation, and have been heavily traveled by people on foot, tend to favour lighter patterns. 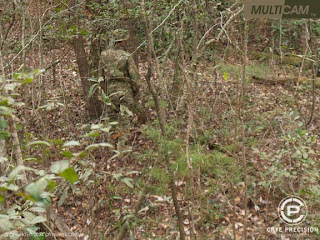 The average Woodsball field usually looks like the picture above, with sparse trees, dead/dying vegetation and dried mud on the ground, and faded wooden bunkers. They tend to feature more brown tones and hues than green overall. When it comes to blending in at outdoor paintball fields, patterns like MultiCam, SURPAT, and A-TACS (and to a lesser extent the controversial UCP/ACU) tend to have the advantage over patterns that tend towards dark green. MultiCam is the one that's most commonly available at the moment, but unfortunately a lot of items using the pattern are very expensive. This is mainly because Crye Precision, the company that developed MultiCam, still holds the patent on it and licences it out to manufacturers at a premium. For those on a tight budget, this can put the option of a MultiCam loadout out of reach. 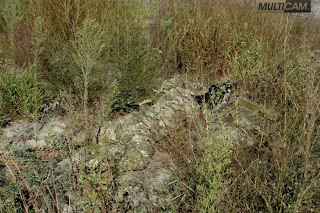 Seeing a market for those who couldn't afford the real deal, our friends the Chinese stepped in a couple of years ago to make MultiCam items using replicated fabrics. These fabrics, sometimes called "Multisham" by bitter MultiCam fanboys, used to have a bad reputation of being poor copies and obvious fakes. But the Chinese always get better at replicating things over time, and their "Multi Camo" replica fabrics are catching up.

In Part 2, we'll take a look at some of these replica fabrics, and how they stack up to Crye's product.