Shots of markers like this are a dime a dozen, and worth about as much: 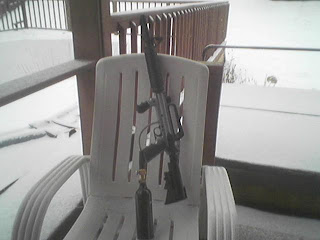 Well over on Milsim Empire, industry vet Doug Brown has stepped up to the plate and created several simple rules for photographing your paintball marker in an aesthetically pleasing way. The following is taken from Milsim Empire with several edits, when you see any personal pronouns used, it is referring to Doug, not me.
This is your basic I don't have a lot of time and I'm too lazy to make a proper job of it photo. It took 30 seconds to make. 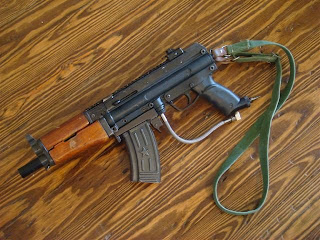 1) I picked a spot in the floor that had light from a) my overhead light b) my desk light ( both are to the right of the photo) and c) daylight from the left of the photo. (note this was not direct sunlight, the gun was in the shade).
2) I made sure my big feet were not in the photo,
3) I propped up the back end of the gun with...something...to get rid of the shadow.


4) I framed the photo and shot 4 pictures. 2 with flash and 2 without. The photo I picked was without flash.
Rule number 1. If you want 1 photo, take at least 4.


Now here's an example of what not to do: 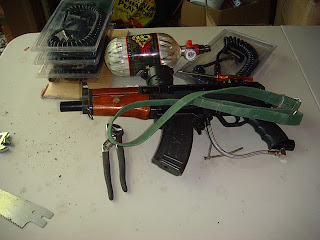 Cluttered background. Now it would seem that this would be obvious but I remember seeing a picture from one of the first guys that bought one of my RPKs. It was taken in his garage and... well lets just say he was a candidate for that new TV show Hoarders.
Rule number 2. The background is important.
Plain and simple is plain and simple.Your not going to win a photography contest, But then ... you're not trying to.
Now in this photo we have used the plain and simple rule but somehow it just looks like crap: 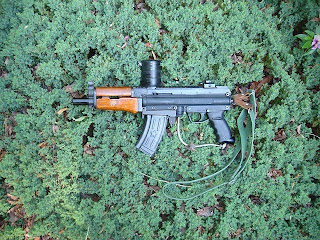 Rule number 3. Fill the frame.
Here is the exact same photo but I have leaned over a bit.
Still not going to win a photography award but, I don't look like a complete twit: 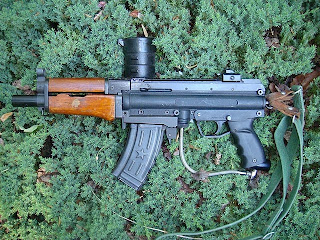 Rule Number 4 . Photography is all about the light.

Reflected light is better than direct light (in most cases). Shadows alway suck.

Case in point. This photo was taken in direct sunlight: 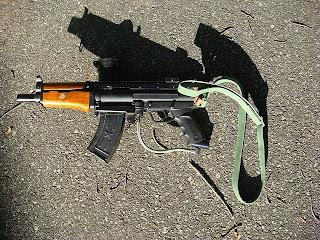 This photo was taken 3 feet away in the shadow of a tree, orientated in the exact same position to the sun. You can see where I put the sling under the back of the gun to let the light under the gun: 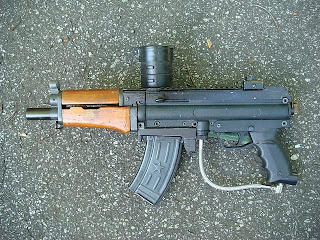 Rule number 5. To Flash or not to Flash.
See rule number 1 and double.
As a general rule if you are having to use a flash to photograph your gun and you haven't taken a 1000 photos with your flash and know exactly what to expect, your not going to get a good picture. Cases in point:
No flash. 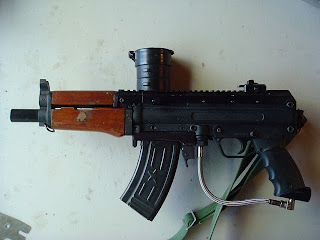 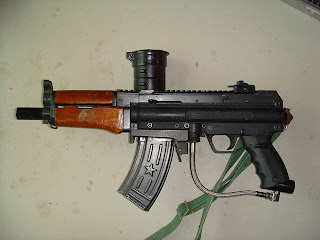 Flash reflecting off magazine but not lighting up gun. 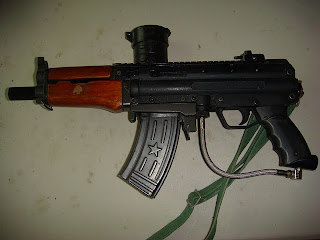 As I did not follow rule number 1 much less rule number 5 I got 3 crappy pictures. I probably could have taken another 10 photographs moving closer and further away and gotten something decent, but why not just wait for the sun to come up? 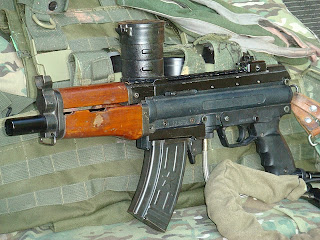 Here is as close to a good image as I got before the dinner bell went off.

So there you go. 5 simple rules. Now I will share a secret with all you snap shot takers. 98% of the best outdoor photographs you have ever seen were taken within an hour of the sun being on the horizon. You can not replicate the light at the beginning or end of the day without $10,000 worth of equipment, a whole lot of skill, and a little bit of luck. Clear skies as a general rule make for boring photographs. Broken clouds are the best. They reflect light and reflected light is nice, warm, and shadow free.
- Doug Brown via Milsim Empire
If you're trying to show off your paintball marker, following the above narrative will most definitely set you on the right track. I haven't included the whole post, so if you'd like to get the whole picture, click right here. Included in the thread are several examples of well photographed paintball markers.
Email Post
Labels: How To Milsim Paintball Proconnect Psiworx