In a day and age where most Milsim paintball teams barely last a season, Quebec's Sudden Harm is celebrating its 10-year anniversary. This Saturday, July 3rd, the team will be playing a game in the Ottawa area! JTs Frontline Paintball will be hosting a game featuring Sudden Harm, open to any Milsim players in Ottawa and the surrounding area.

Sudden Harm contributes scenarios annually to the Big Game at Arnold Paintball in Havelock, Qc. Last year over 300 players took part in their scenario called CARTEL, where the DEA and the private armies of two Columbian cartels fought each other over cocaine packs dropped over the jungle by a pilot about to get caught by authorities. This year's scenario will be a Three Kings-styled battle over Kuwaiti gold bars, in an event called Saddam's Gold. 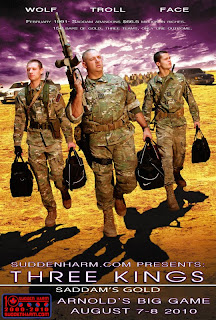 As die-hard military buffs, Sudden Harm members abide by a strict code of conduct, follow a rank structure and perform drill, and wear a common uniform (Crye MultiCam). You probably won't see this level of sophistication in an Ottawa area Milsim team for a while (and of course this level of involvement isn't for everybody), but it certainly would be an experience playing side-by-side with Sudden Harm!

As JT's web site is currently down due to technical issues, here are the directions to the field: Take Highway 416 to the Bankfield Drive exit, go West on Brophy Drive, then turn left on 3rd Line Rd. The field is at 5671 3rd Line Rd, and if you get lost the phone number for the place is (613) 302-5872. 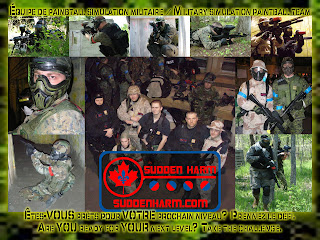