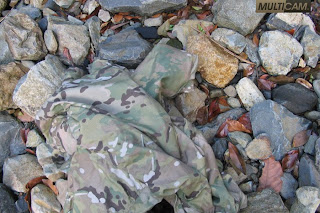 In Part 1 of this article, we looked at the versatility and effectiveness of the MultiCam pattern for Milsim paintball, and the reason for the relatively high cost of MultiCam items. In this part we'll see how the Chinese replica items measure up, and if they truly are close enough to be a good value.

Before we continue, I have to say that I'm all for buying genuine MultiCam gear if you have the option. For starters, Crye put in the money for R&D on the pattern, and it's only fair that they reap the rewards by licencing it to manufacturers. And some genuine MultiCam items aren't that much more expensive than the Chinese copies, so you only have to kick in a few extra dollars to get the real thing. But in some cases that just can't be done. One area where this is obvious is with MultiCam vests or plate carriers; a quality MultiCam MOLLE vest can easily cost hundreds of dollars, and that's before the cost of pouches. 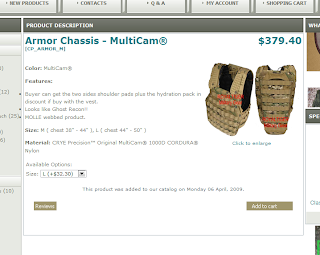 As another example, if you fancy Crye Precision's combat shirt & pants set, with the moisture-wicking torso and built-in elbow and knee pads, you'll have to shell out a whopping $400 with shipping for it. 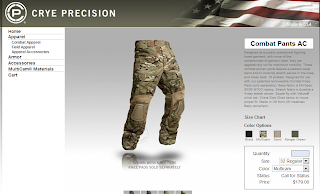 Obviously these items can be cost-prohibitive beyond reason for a casual Milsim paintballer who plays a couple games a month, and much less expensive Chinese replicas become a real consideration for that player.

Anyway if you're dead-set against buying "Multisham", be it for moral guilt about copyright infringement, or some fanboyism/weird emotional attachment to the pattern, reading the rest of this article may cause you to blow a gasket. May I suggest you head on over to the MultiCam Addicts forum, where they praise the almighty Crye, and posting a photo of yourself wearing even one item of replica gear is grounds for being banned. For the rest of us, consider this article an examination of the current "State-of-the-art" of Chinese replica gear, and how the products currently available stack up to the real deal.

I'll be demonstrating the differences with plenty of photos, with the following contenders: On the side of genuine Multicam, I've got a TRU-Spec TRU shirt & pants set, and some accessories from OPS, Propper, and 914 Innovations. On the Chinese side, I have a MILSIG MOLLE Hydration Vest, 2 different combat shirt & pants sets from MILSIG and Royal Tiger Gear, and miscellaneous accessories from various manufacturers. So with more than enough samples of each to make a fair comparison, let's take a look at them side by side. 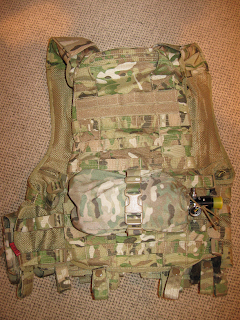 The above photo shows the MILSIG MOLLE Hydration Vest. Although MILSIG uses genuine Crye Precision MultiCam fabric for most of their Solid Gear line, they admit this vest is made with replica fabric. Contrast the vest, which carries a lot of dark browns, and the horizontal tank pouch made by 914 Innovations (an eBay seller). 914i's pouch is made from genuine MultiCam, and tends more towards light green, with more subdued browns.

This next photo shows the MILSIG vest next to a pair of TRU-Spec TRU pants, made from genuine MultiCam: 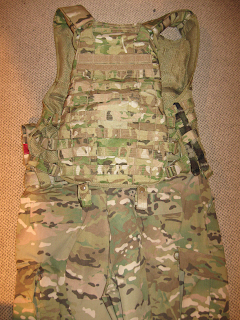 Hold the phone! The patterns are almost identical, and the shades of brown and green go together really well. What's going on?

In this next photo, we'll look at the TRU pants next to some Chinese knock-offs of the latest Crye Precision Combat Pants AC: 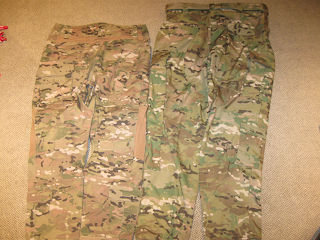 The patterning (shapes) is very similar, but the colour palette of the replicas tends more towards a pinkish salmon colour. In fact, when the Chinese get it wrong, it's usually in this way (too much pink in the pattern). Although there's a touch of salmon/pink in the real deal pants, they tend overall towards lime green.

Now things get weird again. Here's a photo of the combat shirt from that Chinese set, next to the TRU pants: 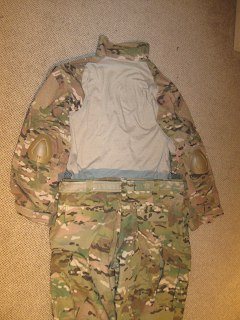 The shirt is still a LITTLE pink in the lower right sleeve, but it could be worn with the TRU pants without most people even noticing a difference.

Our march through the Twilight Zone continues! Below is a photo of the TRU pants next to the TRU shirt, both being genuine items made by TRU-Spec. The photo was taken using a flash, with the point of aim being the tail of the shirt (so that both pieces received equal light): 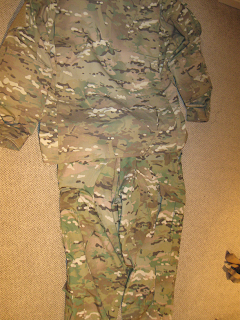 Despite both items being from the same manufacturer, in the same product line, using genuine licenced Crye MultiCam, we see quite a difference in the pattern! The pants have vivid, vibrant colours, while the shirt is a lot more subdued. The shirt also features more of the salmon/pink colour than the pants, bringing the TRU shirt more in line with the replica combat shirt's pattern.

Now we've had a few hits here, but I want to point out that all is not always "rosy" with Chinese replica MultiCam fabrics. In this photo, I've put the TRU pants on the right, next to a replica of Crye Precision's original Gen 1 pants: 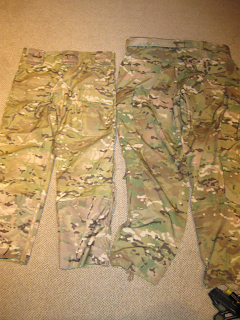 These replica pants were an EPIC FAIL. Not only do they tend to a puke-like green colour overall, but on the lower leg and belt loops of the replica pants, you'll see that the fabric looks almost light purple. Those parts are made of Cordura nylon, and the Chinese often seem to have a real problem getting the dyes on Cordura just right. Here's another example from a MILSIG promo (look at the pink knees of the BDU pants, which are reinforced with Cordura): 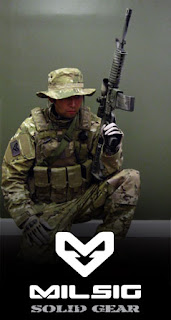 To be fair, the pants are made using an older version of the Chinese MultiCam cloth, and that was the version that earned it a bad reputation. As we've seen earlier, it's generally not that bad nowadays, and the Cordura dyes are a lot better with the current runs. The MILSIG vest we saw earlier shows how good some of the current Cordura is, and other Cordura nylon items are pretty good as well. Here's a photo of a Chinese Cordura folding dump pouch next to the TRU shirt: 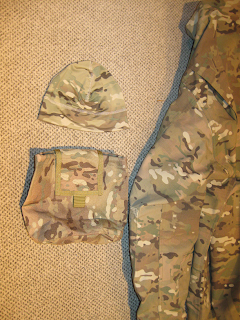 The top flap is a little pink, but overall it matches pretty well. Incidentally, the item above the dump pouch is a Chinese stretchy skullcap, and it's quite bang-on in terms of being faithful to the MultiCam pattern and colours. I was really impressed when that little gem came in the mail. Here's a photo of it next to a padded MOLLE belt made from real MultiCam (from OPS): 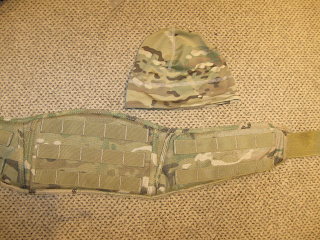 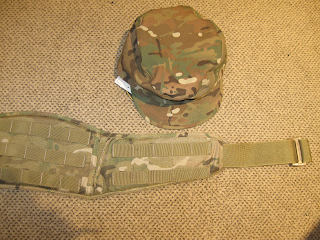 What the hell??? They don't even look alike at all! The pattern is similar, but the colours are vastly different.

So what have we seen and learned from this comparison? Well, first of all we can say that Chinese manufacturers used to really suck at copying MultiCam (especially with their Cordura items), but are getting a LOT better. If the skullcap and MILSIG vest are any indication, soon it'll be impossible to tell the real thing from the fake upon casual observation.

Secondly, we've seen that there's often a huge variation in the patterns and colours of the authentic MultiCam stuff itself. Even items from the same company or product line may sometimes not match.

Third, because the genuine pattern is designed to blend well with jumbled environments, it can be very forgiving in terms of matching with similar replica patterns - as long as the colours aren't too different and clash. In fact, from further than 6 feet away, replica and genuine items tend to blend together, and it can be really hard to tell the difference. We saw an example of this when the TRU pants were placed with the replica combat shirt, but it applies to other items too.

So with Chinese MultiCam looking almost like the real thing, with the real thing varying so much sometimes that the "standard" pattern itself is pretty vague, and with the real fabric "helping" replica fabric blend in, is there any reason to buy genuine MultiCam items anymore? Well, that really depends on a lot of factors, with the main one being your budget. Genuine TRU-Spec or Propper BDUs can be had for $90 to $100 (top & bottom) if you shop around online, while the replica BDUs (see Mr. Pink Knees above) sell for around $50 to $60. With such a minor price difference, I'd recommend going with authentic MultiCam BDUs as a base. Because those will cover the largest surface on your body, and the pattern is designed to blend in universally with similar colours, any MultiCam replica vest/pouch/hat/belt or smaller item with a similar colour palette should blend in and match overall. In fact, unless someone is standing right next to you, they probably wouldn't even be able to tell the difference.

Usually, Chinese items are of lower quality, and this is no exception with their replica MultiCam gear. You obviously won't get the quality of a $400 Crye Precision combat set out of an $80 replica, so this is to be expected when you look to pay less. However, there have been many complaints from users that the real deal Crye stuff is low-quality and falls apart easily too (although they may have fixed this problem by now), so paying the $400 may not get you ahead.

Also, remember that this is Paintball, not real war. Unless you sprint and dive onto a pile of rocks and gravel at every paintball game (and obviously you wouldn't be playing for long if you did), even the lower-quality Chinese stuff will hold together for a couple of seasons. And by then the next big thing will be out anyway, and you'll want to replace your MultiCam for Active Camouflage or whatever rocks at the time!
Email Post
Labels: Camouflage Cordura Milsig Milsim Multicam Paintball